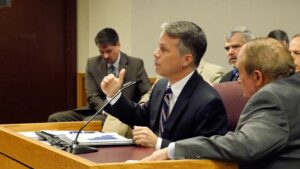 With the 7th largest transportation system in the U.S. but a ranking of 46th in revenue per mile, Missouri has accumulated more than $800 million a year in unfunded needs. And our roads and bridges are showing it.

However, the legislature is working to advance a key part of a multifaceted solution.

Missouri has some of the lowest-taxed fuel in the country, which hasn’t been adjusted for inflation since 1996. Three bills to make that inflation adjustment were heard in House committee on Mar 14.

A more gradual increase was proposed in House Bill 2148 by Rep. Bart Korman, a Republican from High Hill. It implements a 10 cent increase by raising the tax $0.02 yearly, starting in 2019 and ending in 2023. The bill also includes a provision for alternative motor fuels.

Patrick McKenna, director of the Missouri Department of Transportation, said Missouri citizens currently pay between $20 and $30 a month for all transportation fees—vehicle fees and fuel tax for federal and state combined.

However, said McKenna, poor road conditions are costing the average Missouri driver about $170 a month.

“Fixing the conditions of our roads and addressing them as quickly as possible can help reduce those costs,” McKenna said. “This is a good investment. It’s an investment that will help bring a return on investment to the citizens who pay this.”

A 10 cent per gallon fuel tax increase would only mean an additional $4 or $5 monthly for the average driver, said McKenna.

He also emphasized another reason for Missouri to take action quickly: the proposed changes to the federal transportation investment program.

“For Missourians to take full advantage of that plan, we do believe we’d need more money to match the federal program. And interestingly, it’s about the same amount that we’re talking about here,” McKenna said.

The Missouri Chamber is a leading advocate of gasoline and diesel tax increases to fund transportation infrastructure work. The chamber also supports looking to a broad spectrum of possible funding sources to help invest in improving the system.

“Increasing transportation funding is one of the top priorities for many of our members across the state,” said Ryan Stauffer of the Missouri Chamber. “I think that was evident in our strategic plan, Missouri 2030, in which we surveyed over a thousand Missouri business leaders and found that only 37% are satisfied with the roads and infrastructure of the state. We also have a lot of support all across the state through our Missouri Chamber Federation, which is over 120 local chambers, that made increasing transportation funding their number one top legislative priority this session.”

All three bills, if passed, would have to go to a vote of the people.

How would better transportation funding benefit your business? Let us know!