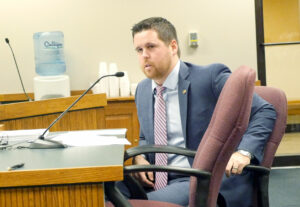 Rep. Fitzpatrick answers questions about HB 1409 at a committee hearing on January 9, 2018.

During past recessions, Missouri took on huge amounts of debt from the federal government to pay out unemployment benefits. This cost employers millions of dollars in interest in addition to what they normally pay into the Unemployment Compensation Trust Fund.

House Bill 1409 is designed to solve that problem by tying Missouri’s unemployment benefits to the state unemployment rate, providing more weeks of benefits during a recession and fewer weeks when jobs are plentiful.

“We’re the only state in the country who has run out of money in our own unemployment trust fund in each of the last five recessions and had to borrow money from the federal government to continue paying benefits. What happens when we borrow from the federal government is that our businesses in the state that pay the unemployment tax basically get what equates to an automatic tax increase,” said Fitzpatrick.

Currently in Missouri, the unemployed can receive 20 weeks of benefits. This bill would change that to a sliding scale. If the unemployment rate is below six percent, benefits last 13 weeks and at nine percent or higher, benefits will last 20 weeks. Between that, every half-percent change in the rate would mean a week’s difference in benefits.

“We think it’s a common sense way to tie the utilization of the benefits to the unemployment rate,” said Matt Panik, the vice president of governmental affairs at the Missouri Chamber. “It’s a very direct connection and as we’ve seen with unemployment now well below four percent currently, we see twelve weeks sort of being the average utilization of those benefits.”

Panik also emphasized the importance of the bill’s provision to increase the amount of money in the fund before employers’ contribution rates are reduced.

“The Chamber has as a priority the long-term solvency of the fund. Of course we saw about a decade ago the problems that happened when the fund became insolvent, so we want to be prepared for the next downturn in the economy which will inevitably happen, and we think this is a very measured way to get there,” Panik said.

The Missouri Chamber was the lead advocate for similar legislation passed in 2015, only for it to be vetoed by former Gov. Jay Nixon. That veto was overridden but the Missouri Supreme Court ruled that the manner in which it was overridden was unconstitutional, so it never became law. Fitzpatrick introduced the same bill again last year, which made it as far as the Senate before session ended.