With growing momentum toward stronger ties between the United States and Cuba, business leaders are increasingly interested in what opportunities exist on the island nation with 11 million residents.

However, one major barrier still exists—the longstanding US trade embargo with Cuba.

President Barack Obama has urged Congress to remove the sanctions, which have been in place since 1960. However, thus far, Congress has not taken up the matter.

To encourage Congress to act, Rep. Warren Love, a Republican from Osceola, has sponsored House Concurrent Resolution 60—legislation that spells out the benefits of opening trade to Cuba. If passed, the resolution would go to each member of Missouri’s Congressional delegation. 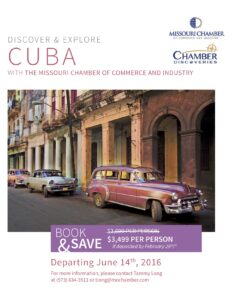 Click to learn more about the Missouri Chamber Federation’s trip to Cuba in June.

“This will send a message to our Missouri legislators in Washington D.C. to encourage better trade relations with Cuba,” said Rep. Love during a hearing on his resolution on Feb. 9.

During the hearing, several Missouri agricultural organizations supported the idea, noting that Cuba would likely provide a great market for Missouri-grown products. The country is also said to be interested in importing genetic assets from Missouri livestock to improve their own livestock.

Several people at the hearing noted that Missouri’s access to the Missouri and Mississippi rivers and the state’s network river ports gives Missouri a logistical upper hand when it comes time to send agricultural goods south to the Cuban market.

Missouri business leaders are invited to explore Cuba firsthand during Missouri Chamber Federation trip there this June. Click here to learn more about this program.

“Certainly there are great opportunities in Cuba for our agricultural businesses,” King said. “Ending sanctions would also create opportunities across many of our state’s important business sectors. We hope to see progress on this in the near future.”