Protecting the arbitration system with HB 1512 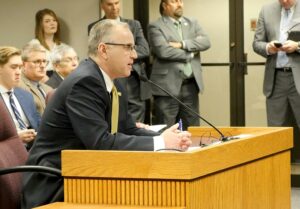 Rep. Kevin Corlew, a Republican from Kansas City, introduced House Bill 1512 to fix this problem. The bill states that in arbitration agreements between an employers and employees, the arbitrator must make all initial decisions rather than taking the dispute to court. This system helps resolve disputes in a more efficient and cost effective manner.

“The U.S. Supreme Court and states throughout the nation have consistently upheld arbitration agreements as reasonable and acceptable alternative dispute resolution mechanisms,” said Corlew. “It is judicially efficient in that it frees up dockets that otherwise could be filled with even more litigation. In arbitration, employees are more likely to get a chance to argue their case and be heard.”

“Arbitration is a fair and cost-efficient process of resolving disputed claims,” said Justin Arnold, general counsel for the Missouri Chamber of Commerce and Industry.  “The validity of arbitration agreements has been muddied by inconsistent court rulings and this piece of legislation will help bring clarity to employers and their employees.”

The Missouri Chamber of Commerce and Industry has been a strong supporter of this issue. In 2016 the House passed a similar bill and in 2017 the Senate passed another, but both years the legislation was not finalized before session adjourned for the year.