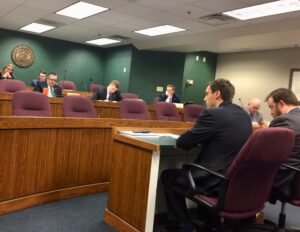 A Missouri House committee has begun work on a bill to ensure that public employees have an easy way to opt out of union membership and stop any paycheck deductions that might fund the union’s political advocacy work.

Rep. Jered Taylor, a Republican from Nixa, sponsored House Bill 1413, which was heard in the House Economic Development Committee on Jan. 17. The legislation is commonly referred to as the paycheck protection bill.

As he introduced his bill to the committee, Rep. Taylor said the legislation would require written annual authorization for any union-related deductions from government employees’ paychecks. Rep. Taylor said the bill would also provide greater transparency for public union members by requiring the unions to maintain financial records for five years and make those records easily available to any employee member who wants to review them.

The Missouri Chamber of Commerce and Industry has supported this legislation for several years and Matt Panik, vice president of governmental affairs, testified in favor of the bill.

“This issue is fundamentally about fairness,” Panik said. “We don’t think employees should be forced to forfeit a portion of their paychecks to go to political causes that they might not support or they might not want to pursue.”

Panik noted that payroll deduction — for a multitude of purposes — is a common practice in most workplaces today and that many deductions are required to be reauthorized each year. The Missouri Chamber believes public union dues should face the same reauthorization process.

“We believe that an important decision like this — taking more of an employee’s take home pay away to go to political causes or other issues that the unions might be pursuing — we think it’s reasonable to require a reauthorization of that once every year,” Panik said. “Certainly if the employees are OK with what the unions are doing, if they agree with the political causes that they are taking up, they will simply check a box once every year and continue to have that money deducted from their paychecks.”

Panik also noted that federal action is expected on a related issue in the near future as the U.S. Supreme Court will consider the case Janus v. AFSCME which could stop public unions from collecting fees from non-members.