One month to go: seven bills to watch 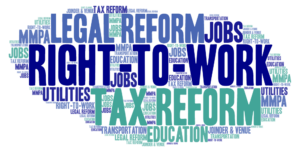 The end of legislative session is already quickly approaching. Despite some predictions of inertia during these final weeks, the Missouri Chamber of Commerce and Industry is continuing to advocate for several critical bills to improve Missouri’s business climate.

While hundreds of bills are still technically in play, we’ve chosen to highlight the top seven proposals that the business community should be watching closely.

We need your help to get these bills across the finish line. Please consider contacting your local House and Senate members and asking them to make these bills a priority during this final month.

#1 Venue reform
Missouri’s existing venue and joinder laws allow thousands of out-of-state cases to be transferred here and clog our court system. House Bill 1578 by Rep. Glen Kolkmeyer ends that unfair practice and helps address Missouri’s reputation as having one of the nation’s worst legal climates. The bill has already passed the House and a Senate committee.

What you can do: Ask your senator to support House Bill 1578 when it comes to the floor.

#2 Right-to-work
Right-to-work, although signed into law in 2017, is currently pending the outcome of a statewide vote. Missourians may also get to vote on up to two right-to-work constitutional amendments later this year. Joining dozens of other states in ensuring that workers are not required to join a union and pay dues is an important provision of the Missouri 2030 plan, a statewide strategic plan for growth. Even though right-to-work has not yet gone into effect, just having the law signed by the governor has led to increased interest in bringing business investment to the state, according to Missouri’s top economic development official. Likewise, company relocation experts have said the state’s right-to-work law puts Missouri in play for more expansion projects. The Missouri Chamber will continue to keep members informed about right-to-work and what members can do to help finally enact right-to-work protections in our state.

What you can do: Talk to your colleagues and community members about why right-to-work is important to Missouri’s future job attraction efforts.

With the 7th largest highway system in the U.S. but a ranking of 46th in revenue per mile, Missouri has accumulated more than $800 million a year in unfunded transportation needs. Missouri has a logistics advantage because of its central location, rivers, and large railroad and highway systems. However, more infrastructure investment is needed to position Missouri as a competitive hub for commerce in the Midwest, as well as to address the safety concerns of road users. A straightforward solution to the problem is raising our fuel taxes, which are the 47th lowest in the nation and haven’t been raised since 1996.

Stemming from the recommendations of the 21st Century Missouri Transportation System Task Force, several House and Senate bills to raise fuel taxes have been proposed. Additionally, some of the tax bills under consideration by the legislature also have fuel tax provisions.

What you can do: Let your lawmakers know that modern transportation infrastructure is important to your business. Missouri needs more funding to maintain and improve our system.

#4 Modernizing utility infrastructure
SB 564 by Sen. Ed Emery helps modernize the state’s utility infrastructure while ensuring energy consumers receive the full benefit of the Tax Cuts and Jobs Act of 2017 by hastening the passage of more than $100 million in federal tax savings to Missouri utility customers. This bill has passed in the Senate and has since passed House committee as well.

What you can do: Ask your representative to support SB 564 when it comes to the floor for a vote.

#5 State tax reform
One of the legislature’s biggest priorities this session is redesigning Missouri’s tax system, reducing the burden on businesses and individuals to grow the state’s economy and competitiveness.

Latest action: Sen. Eigel’s SB 617 has been perfected by the Senate and awaits a final floor vote. Sen. Koenig’s SB 674, which has passed the Senate and gone to the House, dramatically lowers the corporate tax rate to be one of the lowest in the country. Meanwhile, Rep. Elijah Haahr’s HB 2540 was passed in the House. The Missouri Chamber continues to engage with legislators in this discussion and is monitoring all of the tax reform bills under consideration.

What you can do: It’s critical that Missouri business leaders reach out to their House and Senate members on this issue to advocate for positive tax reform that doesn’t come at the expense of the business community.

#6 Business Premises Safety Act
Under current law, companies are at risk of being held liable for crimes committed on their property by third parties beyond their control. Sen. Denny Hoskins’ SB 608 protects businesses from liability for unpreventable criminal acts on their premises. This bill has passed the Senate and a House committee.

What you can do: The bill still needs a vote in the House of Representatives to pass. Let your representative know SB 608 is important to your business.

What you can do: This bill appears to have a strong chance of passing. However, if computer science skills are important to your business, contact your lawmakers and make sure this bill doesn’t get lost during the final weeks of session.

Extending Missouri Works and Works Training
These programs are two of Missouri’s most popular and successful job-creation incentives. They are set to expire next year, but Sen. Jay Wasson’s SB 549 extends them through 2030.

Reforming the asbestos trust system
Stopping the practice of “double-dipping” into limited asbestos trust funds will help bring fairness and transparency to the system. This legislation also helps protect smaller businesses from being pulled into illegitimate claims.

Stopping excessive punitive damages
Trial lawyers in Missouri often use the threat of costly punitive damages to help drive up payouts from businesses. The legislature is working to stop this practice.

Extending sports event incentives
This tax credit has helped bring a wide variety of spectator events to the state, including three college basketball tournaments in 2018. HB 1438 by Rep. Jean Evans is an effort to keep the incentives going through 2030.

Fixing the Missouri Merchandising Practices Act (MMPA)
A law intended to protect Missouri consumers is now more commonly being used against them to line the pockets of trial attorneys. Clarifying the law will help end junk lawsuits like these where “deceived” consumers take home a few dollars while the lawyers reap millions, making it harder for companies to compete in Missouri and increasing the cost of many goods and services.