A new approach to right-to-work 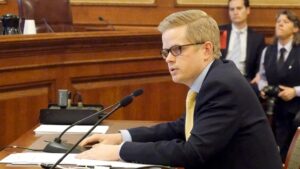 With Missouri’s 2017 right-to-work law still in limbo pending a vote later this year, a Missouri Senate committee is considering a new approach that would enshrine this protection.

Senate Joint Resolution 40 by Sen. Caleb Rowden amends the state constitution to ensure that Missouri workers are not required to join a union and pay dues as a condition of employment. It was heard in committee on March 28.

Rowden explained this legislation could help address Missouri’s downward trajectory in labor union participation rates because it would make the state more attractive in the competition for new jobs, including union jobs. He cited data that showed union memberships in Missouri have dropped from around 13 percent to less than 8 percent since 2003.

“Becoming a freedom-to-work state puts us in conversations that we are not currently and will not have the ability to be a part of, as it relates to attracting companies,” said Rowden.

“We’ve seen every state that borders Missouri except for Illinois become right-to-work and we know that those states are growing wages and growing in jobs. Missouri needs to be a part of that competition,” Panik said. “We’ve engaged in a survey process with site selectors and business executives, and time and again the site selectors especially will say that Missouri is not even in consideration for perhaps a new manufacturing plant, and we need to be on that list.”

If passed, SJR 40 would also have to go to a vote.

The Missouri Chamber continues to closely monitor every aspect of the right-to-work discussion. Enacting right-to-work is an important provision of the Missouri 2030 plan, a statewide strategic plan for growth.