MoDOT Director: Not investing comes at a cost 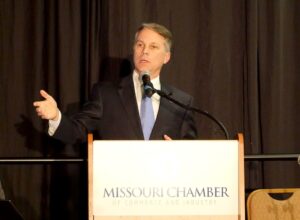 What’s the price of not investing in transportation?

With the 7th largest transportation system in the U.S. but a ranking of 46th in revenue per mile, Missouri has accumulated more than $800 million in unfunded needs. And the problem will only get worse the longer it isn’t addressed.

“Each year of inflation has eaten away at our purchasing power,” McKenna said. “We’ve gone so long without investment that the cost of doing nothing is far exceeding the cost of fixing the system.”

The condition of Missouri’s bridges alone is a concerning example of what McKenna’s department faces.

He said that of Missouri’s 207 major bridges, 62 need to be rehabbed or replaced in the next ten years. There is only money for 12.

He illustrated the potential individual impact of the situation with an all-too-real example: The Rocheport bridge repair project, which he said could begin as soon as 2019 or 2020.

“Rehabbing that bridge will force us to shut down one lane in each direction on I-70 for a minimum of nine months,” said McKenna. “On a good day in that traffic model, we’re going to back up to Columbia. It’s going to be a three-hour delay in each direction…This is the price of inaction.”

On a more positive note, McKenna said it’s not impossible to get approximately 65 percent of the projected unfunded needs covered in the next ten years if the necessary steps to increase funding are taken.

“It’s taken nearly three decades to build the unfunded issue that we have today. Solving 65 percent of it in a decade is spectacular. It doesn’t cover everything, but it makes substantial progress,” said McKenna.  “But it is only possible with action.”

What's the price of not continually investing in transportation? Anyone traveling on I-70 during the Rocheport bridge repair project will have plenty of time to contemplate that question according to @ModotDirector Patrick McKenna. #MoTranspo pic.twitter.com/5VTf0PmJnd