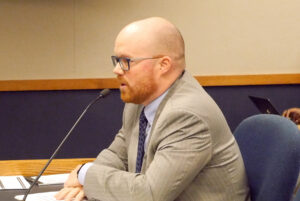 Missouri Works, a longstanding and successful program overseen by the Department of Economic Development, incentivizes job creation in the state by allowing companies to keep a portion of their withholding taxes for a set period of time. It also issues additional tax credits to qualified companies under certain circumstances.

House Bill 255 and Senate Bill 56 would allow some Missouri Works tax credits to be paid on the front end to help with the costs associated with locating or expanding within our state. The bills are sponsored by Rep. Travis Fitzwater (R-Holts Summit) and Sen. Mike Cierpiot (R-Lee’s Summit) respectively.

“Basically, what we’re doing is revamping a program that’s already on the books, that we already give tax credits to, and allowing 20 percent — a little over 20 percent — of that program to be devoted to a closing fund that will allow our Department of Economic Development to make agreements with companies to come in and create new jobs in our state,” said Rep. Fitzwater at his bill’s committee hearing.

The modification would allow a qualified company a tax credit of up to 9 percent of new payroll issued within one year, if the company creates 10 or more jobs at an average wage of 90% or more of the county average wage.

“We’re very excited with the setup of this deal-closing fund and we’d definitely like to see it happen. I think the Department of Economic Development will have discretion to make sure that the tax credits are offered to companies that will stay here, will create jobs, will have investment in the state — not necessarily brand-new startups or companies that aren’t really doing a very good job,” said Matt Panik, the Missouri Chamber’s vice president of governmental affairs. “We want to make sure we have good jobs here — good, high-paying jobs.”