Dan Mehan, president and CEO of the Missouri Chamber

That’s the concern of the majority of likely Missouri voters, according to a statewide survey.  Seventy-nine percent of Missourians say the number of lawsuits in the state is a serious problem, with a full 39 percent stating that the problem is “very serious.”

The survey, conducted by Public Opinion Strategies for the U.S. Chamber Institute for Legal Reform, shows the concern crosses party lines.  Eighty nine percent of Republicans, 78 percent of Independents, and 70 percent of Democrats say the number of lawsuits is a serious problem.

And it’s not just the number of lawsuits that raises eyebrows– but also who is benefiting from them. Missouri voters feel that the legal system they fund with their tax money is tilted heavily in favor of the plaintiffs’ bar.  In fact, 66 percent of those surveyed said the biggest beneficiary of Missouri’s lawsuit system is the plaintiffs’ bar.  Only six percent answered that the victims benefit most. 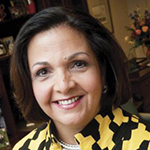 Lisa A. Rickard, president of the U.S. Chamber Institute for Legal Reform

Seventy-two percent of Missouri voters also expressed concern about the state’s poor showing in the 2015 Lawsuit Climate Rankings.  The report, conducted by the global polling firm Harris Interactive for the Institute for Legal Reform, ranks the legal climates of the 50 states.  Missouri ranked 42nd out of 50 states—an all-time low.

It’s no wonder the voters are concerned.

While the state legislature passed some legal reforms during the past few years, efforts to truly transform the legal climate have been about as effective as moving deck chairs on the Titanic.  That’s because many of the state’s reforms have been struck down by the Missouri Supreme Court.

In 2014, the Court invalidated an almost decade-old statute that capped punitive damages at the greater of $500,000 or five times the amount of the total judgment.  This ruling came from a case in which $1 million was awarded for punitive damages when the economic damages were a mere $25,000.

Similarly, in 2012, the Court struck down a statute that capped noneconomic damages in medical liability lawsuits – awards that go beyond the actual quantifiable costs of the injury to the plaintiff.  This resulted in Missouri healthcare providers experiencing a hefty price increase in their medical malpractice insurance premiums, as providers braced for bigger lawsuit payouts.

Those polled are also very concerned with the increasing volume of lawsuits in the state. Our latest public opinion survey showed that 80 percent of likely voters are not happy about lawsuits overflowing into Missouri from near-by Madison County, Illinois.  Just over the river from St. Louis, Madison County has earned a reputation as one of the most lawsuit-friendly jurisdictions in the country, where both the plaintiffs and the defendants often have little or no connection to the area.

With an international reputation as a haven for lawsuit abuse, the Madison County model is not one that Missouri should emulate.

Clearly, Missourians believe the state’s lawsuit system is broken.  And while for the time being the Missouri Supreme Court can stand in the way of reforms, the legislature still has an obligation to fix the system. And if they do, Missourians support them:

All of these reforms would be big steps forward toward a fairer and more balanced system.

Missourians recognize there is a lawsuit problem here.  And if our survey shows anything, it is voters saying “Show Me the Legal Reform.” If the politicians do so, the voters, at least, will be cheering.