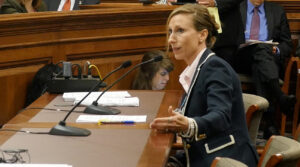 Rep. Holly Rehder continued her efforts to create a prescription drug monitoring program again this week, introducing HB 1892 in the Senate Transportation, Infrastructure and Public Safety Committee. The bill, known as the Narcotics Control Act, is an effort to rein in prescription drug abuse throughout the state.

The act would require the Department of Health and Senior Services to establish a program to monitor the prescribing and dispensing of controlled substances in Missouri.

Cindy O’Neill of Wildwood testified in support of the bill. In late 2015, her husband, Jim, committed suicide after being prescribed what Cindy referred to as a “massive amount of medication” by two doctors who had no idea what the other was prescribing. After an argument over the amount of medication Jim was taking, Cindy came home to find her husband had taken his own life on the eve of his 53rd birthday.

“Jim hurt his back and went to a pain management doctor and was prescribed 100 oxycodone,” O’Neil testified. “He was also seeing a psychiatrist for mild depression and ADD and being prescribed medications for those. Neither doctor knew about the other. I told the pain management doctor this was too much medication and unfortunately Jim became addicted. He was being fed these pills. Had he lived in Arizona, Florida, Indiana, Tennessee or anywhere other than Missouri, he would still be here today. The lack of a PDMP in Missouri is what cost him his life in my opinion.”

The act would also require all submitted prescription information to be kept confidential with specified exceptions.

Brad Green, director of legislative affairs for the Missouri Chamber, testified in support of the bill.

For more information about this legislation, please contact Brad Green at bgreen@mochamber.com or by phone at 573.634.3511.