The Missouri Chamber of Commerce and Industry has released its 2019 pro-business agenda as lawmakers prepare to build on last year’s progress. Among the Missouri Chamber’s top priorities are civil justice and initiative petition reforms, infrastructure investment, and workforce development policies. 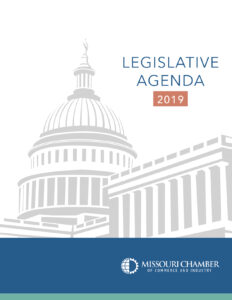 Too often, plaintiffs with little or no connection to Missouri are filing cases in plaintiff-friendly St. Louis and Kansas City courts in hope of getting big settlements. This is clogging our judicial system, costing Missouri taxpayers and delaying justice for Missourians who have properly filed their cases. The Missouri Chamber supports efforts to clarify the state’s venue and joinder laws to ensure proper forum.

In addition, the Missouri Chamber supports reinstating punitive damage caps to curb outlandish awards, as well as instituting a reasonable statute of repose so that companies are not exposed to liability regarding previously produced products for which regulations have since changed.

The Missouri Chamber also supports legislation that would require the disclosure of asbestos bankruptcy claims before trial. This would increase transparency and curtail fraudulent claims, allow businesses to fairly litigate all relevant exposures and ensure there will be compensation for future claimants.

Furthermore, the Missouri Chamber supports strengthening the Missouri Merchandising Practices Act (MMPA) to reduce the number of frivolous slack-fill food cases and bogus class actions by those who suffered no actual harm.

“Missouri continues to rank near the bottom when it comes to the fairness of our judicial system,” said Daniel P. Mehan, president and CEO of the Missouri Chamber of Commerce and Industry. “If we are serious about moving forward with our work to create a climate that attracts jobs and business investment, we can’t continue being a haven for blockbuster lawsuits. We feel confident that the Missouri General Assembly understands the urgency of this problem and is prepared to act on legal climate reforms in 2019.”

The number of initiative petitions filed each election cycle has grown in recent years from a few dozen to hundreds. During the last election cycle, the Secretary of State’s office had to cope with processing more than 370 petitions.

Most concerning are the petitions being funded by out-of-state interest groups. Such ballot measures are often laced with items that have widespread voter appeal but seek to obscure the measure’s true effects. In addition, some initiative petitions are poorly drafted and, if they become law, create years of costly subsequent litigation.

The Missouri Chamber supports initiative petition process reforms to restore efficiency to the system and to help guard against out-of-state interests attempting to rewrite Missouri statutes and alter our state constitution.

“Following the 2018 election cycle, it should be clear to everyone that Missouri is in dire need of reforms to our initiative petition process,” said Mehan. “It shouldn’t matter where you stand on the issues — every Missourian should be deeply concerned that our current process gives anyone who can afford to pay signature gatherers and buy slick election marketing the power to rewrite the rules that govern our state. We will support efforts this session to make modest reforms to address these issues.”

With the defeat of Proposition D last fall, the state’s transportation infrastructure remains critically underfunded. According the Missouri 2030 Dashboard, Missouri ranks 41st in bridge integrity and continues to rank among the bottom states for road quality. The Missouri Chamber is continuing its efforts to support finding stakeholder-driven solutions that provide long-term, sustainable funding for the maintenance and improvement of our state’s transportation system to help maximize Missouri’s position as a centrally located transportation hub. The Missouri Chamber will also be involved in efforts to improve energy, water and broadband infrastructure.

“Transportation funding remains a critical need in Missouri. This issue is not going to go away until we are able to invest in this basic infrastructure that serves as the backbone of our economy,” said Mehan. “The business community remains committed to moving this discussion forward.”

Perhaps no other issue affects Missouri employers’ ability to compete as much as workforce development and education. Workforce policy success was a highlight of the 2018 session, with the Missouri Chamber helping to pass legislation to fully fund the state’s public-school funding formula, allocate $3 million in the state budget to open adult high schools, expand teacher externships, allow computer science courses to count toward core graduation requirements and implement visiting scholars certification to help bring business knowledge to Missouri classrooms.

“Employers across Missouri want to hire, but they continue to struggle to find the workers they need,” said Mehan. “Workforce is a deeply complex issue that encompasses everything from reforming our education system to doing more to stop the outflow of young workers our state is currently experiencing. We think the Missouri General Assembly can play an important role in this discussion and we look forward to continuing to work with lawmakers to address this issue.”

The driving force behind it all

“The past few years have proven that when the business community stands together, we can help chart the course for Missouri’s future. Through Missouri 2030, we have put a data-driven agenda into action that is moving our state forward,” said Daniel P. Mehan, Missouri Chamber president and CEO. “The year 2030 is closer than it seems. While we had many successes to celebrate in 2018, we need to continue the momentum. As legislators prepare to convene at the Capitol, the Missouri Chamber would like to thank them for their service and remind them that the business community remains a strong advocate for their efforts to make Missouri one of the best places to do business.”