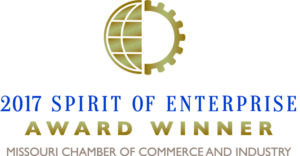 Each year the Missouri Chamber of Commerce and Industry honors legislators who have gone above and beyond in support of pro-jobs legislation with the Spirit of Enterprise Award. On Thursday, Nov. 16, 2017 at Busch Stadium in St. Louis, Mo., four legislators were given this award during the Missouri Business Awards: Rep. Travis Fitzwater, Rep. Elijah Haahr, Sen. Dan Hegeman and Sen. Bob Onder.

“The Spirit of Enterprise Award recognizes legislators who have consistently shown efforts to protect the free-enterprise system in Missouri,” said Dan Mehan, Missouri Chamber president and CEO. “It is important that we highlight those lawmakers who are fighting for jobs in the Missouri General Assembly.”

Rep. Travis Fitzwater, a Republican from Holts Summit, has been a leader in workforce development policy and a strong advocate for STEM education. He led the effort to pass legislation to create four adult high schools across the state that will give Missourians the opportunity to receive a diploma and the essential skills needed for employability. He also sponsored legislation to increase STEM career awareness for students statewide and was a supporter of the transportation network companies bill that opened Missouri to thousands of jobs with companies like Uber and Lyft.

A champion for the interests of Missouri business, fifth-year Republican Rep. Elijah Haahr from Springfield was recently chosen to become speaker of the house in 2019 and currently serves as pro-tem. He has tackled a wide spread of high-profile legislation including bills to prohibit mandatory union fees and to stop the creation of a confusing, inconsistent patchwork of local minimum wage rates. Haahr also stands out for his 100 percent vote rating from the Missouri Chamber during the 2017 Legislative Session. His rise in leadership can only mean good things for the future of Missouri industry.

Sen. Dan Hegeman, a Republican from Cosby, is a strong supporter of the Missouri business community. Hegeman supported House Bill 1194, which prohibited political subdivisions from requiring a minimum wage that exceeds state law requirements, and sponsored a mirror bill in the Senate. He also supported the successful effort to bring right-to-work to Missouri. His consistent support of pro-jobs legislation earned him a 100 percent vote rating from the Missouri Chamber in 2017.

Sen. Bob Onder, a Republican from Lake Saint Louis, has demonstrated his commitment to growing the Missouri economy with his leadership on pro-business reforms. He authored SB 182, ensuring that contractors have a choice whether they enter into project labor agreements. Onder is also recognized for his involvement with right-to-work legislation, transportation network companies legislation and efforts to expand K-12 virtual education options.