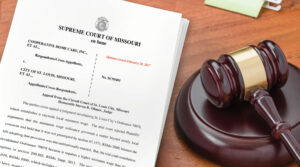 A law that ensures consistent workplace standards across Missouri has been jeopardized by a Missouri Supreme Court ruling today. This law, and many others, are now in question as the Supreme Court reached back to overturn a 1998 law in order to allow St. Louis City to raise its minimum wage.

“The Supreme Court clearly misinterpreted legislative intent on this issue, but even more concerning, has put into question legislative power in Missouri,” said Missouri Chamber president and CEO Dan Mehan. “We believe the Court erred on several counts with this ruling.”

The ruling has short-term and long term effects.

“In the short term, the decision will allow a patchwork of inconsistent laws across the state. Issues like wages and paid leave mandates should be determined through a statewide approach and deliberative debate by the Missouri General Assembly, not on the whim of this or that local ordinance.  There is no limit of the number of damaging workplace mandates municipalities can create to impose on employers.  But the long term impact is more chilling. What lengths will the Missouri Legislature need to go to protect the laws they were elected to pass from the overreach of activist courts?”