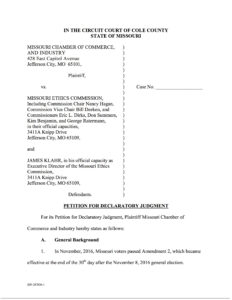 This situation was created by a recent advisory opinion released by the Missouri Ethics Commission. The Missouri Chamber of Commerce and Industry filed a lawsuit today challenging this opinion, arguing that businesses should be able to put money into their own political action committees.

The recent advisory opinion stems from language included in Amendment 2 passed by voters last year — an amendment that has already generated much litigation, causing some of its provisions to be thrown out in court. However, Amendment 2 did not forbid businesses from funding their own political action committees. The Missouri Chamber argues that this decision is an error by the state’s ethics regulators and must now be fixed in the courts.

“This new direction taken by the Missouri Ethics Commission creates a confusing, contradictory situation for businesses. It makes no sense for the State of Missouri to allow businesses to establish political action committees and then turn around and forbid them from placing funds in those committees,” said Daniel P. Mehan, Missouri Chamber president and CEO. “We need clear, commonsense ethics standards in Missouri and this new opinion fails that test.”