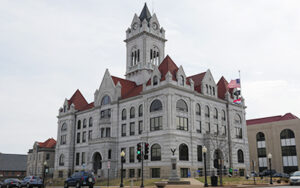 A lawsuit challenging a new Missouri rule that hinders business political activity is headed to trial later this month.

The Missouri Chamber of Commerce and Industry filed the lawsuit last September, challenging the Missouri Ethics Commission on a confusing advisory opinion that blocks businesses from putting money into their own political action committees. 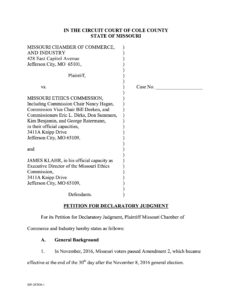 The Missouri Chamber filed a lawsuit challenging this rule. As it stands, the Missouri Chamber itself is unable to invest in its own political action committee. The same holds true for many other businesses and organizations across the state.

Failing to comply with the commission’s rule could lead to sanctions from the ethics commission as well as financial and criminal penalties.

The recent advisory opinion stems from language included in Amendment 2 passed by voters in 2016 — an amendment that has already generated much litigation, causing some of its provisions to be thrown out in court.

The language in Amendment 2 did not forbid businesses from funding their own political action committees. The Missouri Chamber argues that this decision is an error by the state’s ethics regulators and must now be fixed in the courts.

Cole County Circuit Judge Patricia Joyce will hear arguments in the case at 10 a.m. on March 22.

The Missouri Chamber seeks a declaratory judgment determining that the advisory opinion promulgated by MEC was incorrect and that corporations are allowed to establish, solicit contributions, and contribute their own funds directly to a connected PAC.

Does the ethics commission rule make it harder for your businesses to engage in politics? Click here to share your view.