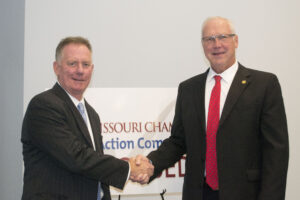 The Missouri Chamber Political Action Committee has endorsed Rep. Mike Cierpiot in the special election for Missouri Senate District 8. The endorsement was officially announced on Oct. 27 at Legacy Touch in Lee’s Summit, Mo.

“We have worked with Mike throughout his career in the state House and as floor leader of the Missouri House,” said Dan Mehan, Missouri Chamber president and CEO. “That leadership has led us to have one of the best legislative sessions that we’ve ever had.”

Cierpiot has served in the Missouri House of Representatives since 2010. 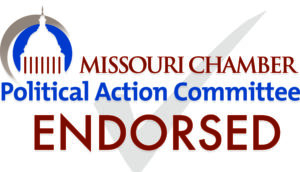 “I find it pretty common sense to support things that help our businesses grow and create jobs,” said Cierpiot. “I realize the government doesn’t create jobs, all we can do is establish a playing field where businesses can thrive.”

At the event, attendees asked Cierpiot about issues including transportation funding and how he plans to continue making Missouri a more competitive state.

“Highway funding is important and it’s something that is struggling. The good thing is, we’re about to have a lot of bonds paid off to free up quite a bit of money in the next few years. That will help dramatically,” said Cierpiot.

He also mentioned the possibility of the Highway Patrol, currently paid for by gas tax funds, being moved to General Revenue, which he said could free about a third of the money received for highway funds.

As for state competition, Cierpiot cited the recent successes in tort and labor reform as significant process and mentioned that tax policy is being examined as well.

“We’ve got Kentucky and Tennessee and Oklahoma and states like that we’re competing with and they’re ahead of us some, but I think with Governor Greitens we’re going to catch up quite a lot in the next three years,” he said.

Mehan encouraged voters to consider the importance of job creation to Missouri’s future.

“Now, more than ever, we need to elect lawmakers like Mike Cierpiot who will take action to protect Missouri’s economy,” Mehan said. “On November 7, we encourage voters in District 8 to cast their votes for Mike Cierpiot.”