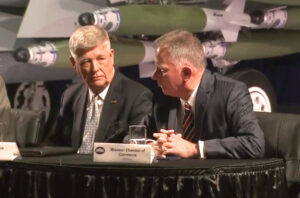 On Mar. 14, top business leaders from across Missouri gathered in St. Louis at Boeing for a roundtable event with President Trump to discuss the impact of the new federal tax cuts.

Missouri Chamber President and CEO Dan Mehan kicked off the roundtable portion of the program.

“On behalf of all the employers in this great state, welcome to our state,” Mehan told the President. “I know we’re talking about taxes today, but your regulatory relief work on health insurance and igniting the debate on infrastructure has been very, very helpful. There’s a lot of optimism around those three things. But the tax relief in particular has Missouri humming again.”

“And a great job you do with the chamber. We appreciate it very much,” Trump said.

The Boeing Company, which hosted the event, was represented by President and CEO Dennis Muilenburg.

“On day one of tax reform we announced an investment of $300 million back into our people,” said Muilenburg. He said that would include facility and infrastructure upgrades, advanced training, digital and manufacturing technologies, and investment in communities and veterans.

“In our U.S. supply chain we have another thirteen thousand companies, small and medium-sized businesses, representing about one and a half million U.S. manufacturing jobs that are all benefiting as a result,” Muilenburg added.

Several employees also shared how their take-home pay increase and bonuses enabled them to invest more in their children’s college funds or pay for things like medical bills.

The roundtable lasted a little over half an hour.

“This has been truly very inspirational to see all of you and what’s happened, and there’s a lot more going to happen. The companies that we have in this country have never been fundamentally stronger,” Trump said in closing.

What impact are the federal tax cuts having on your business? Click here to share your story with us.