Legislation to watch as session ramps up 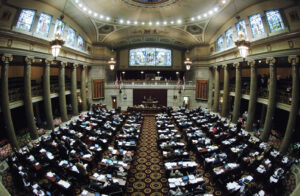 The Missouri General Assembly is wrapping up its second week of the state’s 100th Legislative Session. As legislative committees are formed and lawmakers prepare to hold the first bill hearings of the session, here is a look at some of the most important bills likely to see action early this year.

Missouri’s existing venue and joinder laws allow thousands of out-of-state cases to be transferred here and clog our court system. Senate Bill 7 by Sen. Ed Emery and House Bill 231 by Rep. Glen Kolkmeyer would end that unfair practice and help address Missouri’s reputation as having one of the nation’s worst legal climates. The Missouri Chamber has long advocated for these reforms.

A recent Supreme Court ruling has prompted states to begin imposing sales tax on online retailers. This change helps level the playing field between brick and mortar businesses and online retailers. Senate Bills 46 and 50, sponsored by Sen. Andrew Koenig and Sen. Bill Eigel respectively, both include provisions that require all sellers with an economic nexus to Missouri to collect sales tax, with a threshold of either $100,000 in gross revenue or 200 transactions.

In 2015, the National Labor Relations Board created legal peril for small franchise businesses by allowing these local companies to be linked to big lawsuits involving the national brand. According to one new study, this has cost businesses between $17 billion and $33.3 billion annually and killed between 194,000 and 376,000 potential jobs. Several states have adopted legislation that protects the independence of small franchises and stops them from being linked to national lawsuits. House Bill 300 and Senate Bill 38, sponsored by Rep. Nick Schroer and Sen. Bob Onder respectively, seek to bring these reforms to Missouri. The Missouri Chamber has long supported these reforms that will protect businesses and jobs, and it will continue to lead efforts to pass these bills in 2019.