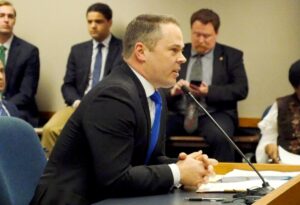 The state tax reform discussion at the Capitol continues, this time with House Bill 2540 brought forward by Rep. Elijah Haahr, a Republican from Springfield.

“By moving our state to the top echelon of competitive tax codes in the country, this would signal to businesses and individuals around the country that Missouri is open for business,” Haahr said at the committee hearing on March 5.

The main provision that sets Haahr’s bill apart from the tax reform bills being considered in the Senate is Haahr’s bill proposes an increase in motor vehicle fees to help increase funding for transportation infrastructure. The bill would index the fees to inflation beginning in 2020. This change could mean an additional $2 billion for infrastructure funding over 10 years.

The bill also adopts the Streamlined Sales and Use Tax Agreement, which could pave the way for sales tax collection on internet purchases. Haahr said seven of Missouri’s eight bordering states have already joined this streamlined compact.

Overall, the Missouri Chamber is supportive of the bill.

“Reducing the individual and corporate income tax rates is very important for the taxpayers,” said Matt Panik, Missouri Chamber vice president of governmental affairs. “I think this makes Missouri a lot more competitive to attract businesses here to the state and to retain those businesses that we have.”

And as one of the leading advocates for infrastructure improvement, the Missouri Chamber supports indexing the drivers’ license and registration fees.

Panik also highlighted the importance of joining the Streamlined Sales Tax Agreement: “It’s time for Missouri to take a hard look at that and to bring some fairness for our in-state retailers.”

However, Panik voiced the Chamber’s concern about the provision that eliminates the timely filing discounts for withholding and sales and use taxes.

“We have a lot of members that do utilize those discounts,” Panik said.

The Missouri Chamber continues to engage with legislators in this discussion and is closely following all of the tax reform bills currently under consideration.

What do you think about tax reform in Missouri? Click here to send us your view.