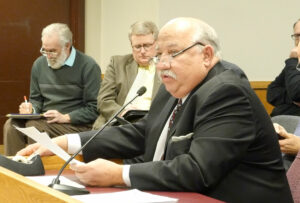 A flood of out-of-state cases in plaintiff-friendly St. Louis and Kansas City courts has been clogging our judicial system, costing Missouri taxpayers and delaying justice for Missourians who properly filed their cases. Our state has been repeatedly listed as one of the worst Judicial Hellholes in the country due to the litigation hotspots caused by lax joinder rules.

Rep. Glen Kolkmeyer (R-Odessa), the bill’s sponsor, said that out of the 13,252 plaintiffs with mass tort litigation in Missouri, only 1,035 are from Missouri and only 242 are from St. Louis.

“Plaintiff lawyers are now abusing a legal process known as joinder to get around the 2005 reforms when they file lawsuits and bring defendants from all over the nation into St. Louis where plaintiffs can get bigger judgements by friendly jurors,” Kolkmeyer explained at the bill’s House committee hearing on Feb. 12. “Lawyers seeking to cash in on pro-plaintiff St. Louis courts are ruining Missouri’s pro-business environment by joining plaintiffs and defendants into St. Louis even with no connection to St. Louis.”

The Missouri Chamber has held a longstanding position in support of this reform.

“HB 231 is needed as it will change the perception of Missouri courts, specifically St. Louis City, which is known as being overly plaintiff-friendly, which is damaging our reputation and business climate in the state. The bill will also free up judicial resources for all Missourians and give businesses across the state clarity in their responsibilities when faced with a lawsuit,” said Kara Corches, Missouri Chamber director of legislative affairs. “When out-of-state plaintiffs sue Missouri businesses in Missouri for alleged torts that occurred outside of the state, venue should properly lie in the county where the company’s registered agents are located. This standard is used in many other circumstances. This bill protects our state’s courts from being used as the nation’s courtroom.”