A great idea only becomes a reality if it can be implemented in a practical and effective way and can secure funding. A bill heard in the House Economic Development, Business Attraction and Retention Committee will serve as a bridge between great ideas and getting those ideas out into the market.

House Bill 2321 would create the Missouri Advanced Industries Accelerator Act and is sponsored by Rep. Caleb Rowden, a Republican from Columbia. 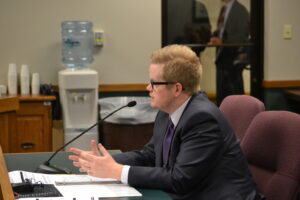 “This idea was born out of 18 months of research I did into key areas that are holding back Missouri’s economy,” Rep. Rowden said. “This bill is designed to provide a bridge between research and innovation and the marketplace.”

The bill would allow the creation of grants to get research to move to the next stage of development. Once a project has been completed, the recipient must identify how the grant created or retained jobs in Missouri, invested or retained capital, and any other economic benefit. The recipient of the grants must also return any funds that were not used toward the project. The act has a six year sunset provision included.

After attending several roundtable discussions to understand the problems facing economic development in Missouri, Rowden discovered a main complaint was access to capital in the advanced industries sector.

Currently the bill establishes a fund that would be administered by the department of economic development, however, Rowden expressed an intent to amend the bill to make it more closely align with angel tax credits and have the fund administered by the Missouri Technology Corporation. Similar legislation was proposed and passed in Colorado with bipartisan support.

In addition, the committee voted to approve House Bill 1389, sponsored by Rep. Nick King, a Republican from Liberty. This bill would expand the successful Manufacturing Jobs Act, opening the program to all Missouri manufacturers.

The Missouri Chamber of Commerce and Industry supports both bills.

For more information please contact Tracy King, vice president of governmental affairs, at 573.634.3511 or by email at tking@mochamber.com