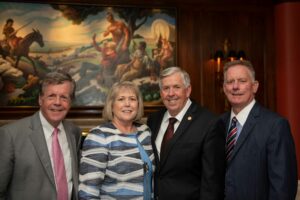 Gov. Mike Parson praised the progress being made toward the goals of the Missouri 2030 strategic plan during a Sept. 5 event. The remarks came during a dinner with Missouri 2030 supporters at The River Club in Kansas City.

“We are making progress in our state,” Parson said. “And the business community, through their work on Missouri 2030, is helping drive those changes. It doesn’t change at each election. And with you behind it, it’s a vision that has significance for today and for the future of Missouri.”

Parson said the two main priorities he has set as governor are infrastructure and workforce development—priorities that align with the Missouri 2030 drivers “Connecting Through Infrastructure” and “Preparing the Workforce.”

“If you want to make the difference in the next generation—for your kids, for your grandkids—the time is now to make those two changes,” he said.

“It’s about you going out and telling the story of why we need this. That’s how we sell this,” he said.

He also stressed the importance of workforce development efforts.

“People are needing good employees to put to work. And we’re not doing a good enough job in Missouri to meet those demands and that’s a problem we all have, especially all of you in this room tonight. And if we don’t start figuring out a solution to workforce development, that problem is going to continue to get worse,” he said.

He said those workforce development efforts must include business and education partnerships.

“We can no longer keep letting education do their thing, government do our thing, and the private sector do their thing. It has to be a combination of the three … One thing I do know from talking to some of the education leaders across the state: they are getting the message loud and clear that we’ve got to do things different. We’ve got to take a different approach to making sure we get young men and women prepared for the workforce,” Parson said.

On that topic, he said with only about 30 percent of Missourians obtaining a 4-year degree, workforce solutions must include developing opportunities like vocational training.

“At least 70 percent of the public in Missouri—what are we doing for them? What is the skills training, what is the tech training, what are the community college resources in our state? That’s all part of the package,” said Parson. “We’re still going to send people to universities and they’re doing good jobs. But the reality of it is, we’ve got to take a whole different look at how we’re preparing the workforce if we’re going to compete.”

Missouri Chamber President and CEO Dan Mehan joined the governor in highlighting the work being done on meeting the lofty goals set out in Missouri 2030. He praised Gov. Parson’s leadership and desire for collaboration.

“If anything, we’ve had much better access and teamwork between the business community and the executive branch than we’ve ever had before in my career at the Missouri Chamber,” said Mehan. “And it’s a credit to the leadership of Mike and to the crew he’s brought on.”

Watch Gov. Mike Parson discuss why Missouri 2030 is so important. We agree — Missouri must act on transportation and workforce! Thanks to @GovParsonMO for taking time out to share your thoughts with #MO2030 supporters. Read more: https://t.co/NF5MIkcYZl pic.twitter.com/MAyItCYIHv