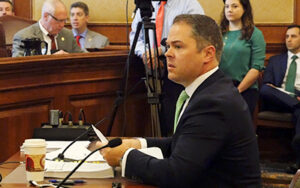 Missouri lawmakers are continuing to make progress in their work to bring tax reform to Missouri.

The Missouri Chamber testified in support of both bills.

SB 674 cuts the state corporate tax from its current 6.25 percent rate to 3.5 percent. This would make it the second lowest rate in the country, a big win for Missouri in the competition for jobs and business expansion opportunities.

To compare, HB 2540 cuts the corporate tax rate to 5 percent. While a smaller cut than the Senate bill, this would still be a good step in the right direction for Missouri’s business climate.

The house bill also contains several other important provisions, including cutting the individual income tax rate to 5 percent and adopting the Streamlined Sales and Use Tax Agreement that could pave the way for sales tax collection on internet purchases.

In addition, HB 2540 indexes vehicle and licensing fees to inflation as a way to generate additional funding for Missouri’s roads and bridges.

“We do want to take a look at any way to move that conversation forward about getting more transportation funding into the system, into the state, so that MoDOT can continue its good work. This is certainly a bold approach. We’re [also] supportive of gas tax increases and other ways to get there,” said Matt Panik, Missouri Chamber Vice President of Governmental Affairs.

However, during the hearing on the house tax reform bill, Panik voiced the Chamber’s opposition to an item in HB 2540 that would eliminate the timely filing discounts for withholding and sales and use taxes.

“There is a cost to businesses for collecting that sales tax and remitting it to the state, regardless of the method that is used to make that collection,” said Panik. “We’re happy the sponsor is taking a look at that and making some changes over in the House.”

“The discussion around tax reform has made great progress this year and there is a growing sentiment that a bill could get passed before the end of session,” said Panik. “The Missouri Chamber will continue advocating for a strong tax reform package that helps put Missouri in a better position for economic growth.”

What state tax reform items would be most valuable to your business? Let us know here.