Five bills on the home stretch 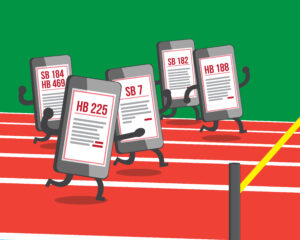 With three weeks left in the session, the Missouri General Assembly continues to work on a wide variety of legislation. Numerous proposals from the Missouri Chamber’s Legislative Agenda are making progress toward final passage.

However, a handful of important bills have reached the home stretch and are well positioned to pass before session adjourns on May 17.

Even though these bills have made strong progress, we urge members of the business community to continue to reach out to their lawmakers and ask them to support final passage.

This bill would reform Missouri’s venue and joinder laws — a top Missouri Chamber legislative priority. The bill would fix a longstanding issue which allows lawsuits with little-or-no connection to Missouri to be filed in plaintiff-friendly St. Louis and Kansas City courts. The bill is sponsored by Sen. Ed Emery, a Republican from Lamar.

Next steps: After going through the House fiscal review committee, one vote in the House of Representatives would send it to Gov. Mike Parson’s desk to be signed into law.

This bill would create the Fast Track program, helping 16,000 working-age adult Missourians pursue higher education to prepare for work in high-demand jobs. The proposal was originally put forward by Gov. Mike Parson and is sponsored by Rep. Kathy Swan, a Republican from Cape Girardeau.

Next steps: The next stop for this bill is the Senate floor. If it passes the Senate, the Missouri House would need to vote to accept the changes made to the bill in a Senate committee before it can be sent to the governor.

Next steps: One vote in the Senate would send House Bill 469 to the governor. Senate Bill 184 needs committee approval in the House and then a vote on the House floor to be finally passed.

This bill is needed to end the economic border war between Missouri and Kansas. The states have spent tens of millions of dollars enticing companies to make a short move across the border with little net job creation for either state. This bill would help end that practice. It’s sponsored by Sen. Mike Cierpiot, a Republican from Lee’s Summit.

Next steps: It’s already been passed by both the Senate and House. If the Senate approves the changes made by the House, it will be sent to the governor.

This bill would create a statewide prescription drug monitoring program, giving physicians and pharmacists a critical tool needed to identify patients who “pill shop.” Missouri is the only state in the nation that lacks a statewide monitoring program, often called a PDMP. The bill is sponsored by Rep. Holly Rehder, a Republican from Sikeston.

Next steps: The bill needs a final vote on the Senate floor to be sent to the governor.