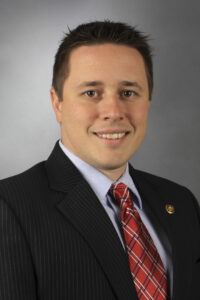 Legislation to encourage more employee ownership of Missouri companies continues to gain momentum in the General Assembly after passing its first test on the Senate floor.

Senate Bill 856 would entice Missouri business owners to sell to their employees by providing a 50 percent tax credit on capital gains from the sale. At least 30 percent of the company would need to be transferred to employees for the tax credit to kick in.

Bill sponsor Sen. Ryan Silvey said the legislation is an attempt to provide a strong alternative to selling businesses out of state or even out of the country.

“We’re just trying to keep businesses locally owned and this is a model that seems to work well,” said Sen. Silvey, a Republican from Kansas City.

The Senate gave first round approval to the bill. It requires one more vote to move to the House.  A similar bill, House Bill 2030, has already passed the House and a Senate committee. It is waiting to be considered by the full Senate.

“While work remains, I’m very encouraged by the progress this legislation is making,” said Tracy King, Missouri Chamber vice president of governmental affairs. “It’s a good sign that supporting ESOPs seems to have bipartisan support in both the House and Senate. However, no bill is ever a done deal until it has been signed by the governor. The best thing Missourians can do to help is to contact their lawmakers and ask them to support Senate Bill 856 and House Bill 2030.”

During committee testimony on the bills, employee-owned companies such as Burns and McDonnell have testified in support.

“HyVee is probably the one people are most familiar with because they put it in their commercials, ‘We are employee owned,’”  Sen. Silvey said. “But they have already went through this process, so they don’t benefit from this. Burns and McDonnell doesn’t benefit from this. But they are all very supportive of this legislation because they know what it’s meant to their company and to their employees. It’s something they want to see other companies be able to do more easily than they did.”

“One of the benefits that we would see if a company were to transition from, say, an out of country sale to an ESOP is the redistribution of the dividends from the shares would remain locally,” he said. “If your employees are located in the State of Missouri, and the company sells to its employees, that means the future dividends on the company’s profits are going to be redistributed to its shareholders which tend to be Missouri citizens.”