Missouri Chamber weighs in on legal battle against the EPA 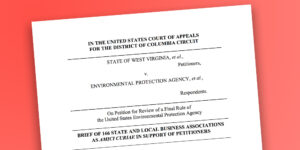 suit by states and industry to overturn EPA’s so-called “Clean Power Plan.”  Under the plan, Missouri would be forced to reduce its carbon emissions from 67.3 million tons in 2020 to 55.4 million tons in 2030, a decrease of almost 18 percent, a reduction that could cause a dramatic increase in energy costs and job loss.

EPA’s greenhouse gas regulations, which were finalized in August of 2015, seek to reduce greenhouse gas emissions from the electricity sector as a whole. The brief outlines the significant detrimental impacts the rule will have on communities throughout the nation. While the U.S. Supreme Court recently recognized the validity of these concerns by imposing a stay in the implementation of the plan, a final ruling on the legality of the regulations still needs to occur to provide certainty to all stakeholders.

“The EPA has admitted that this plan will raise energy costs while making little change in reducing greenhouse gases,” said Brian Bunten, Missouri Chamber general counsel. “It will have a significantly negative impact on jobs, especially in states like Missouri, which rely heavily on coal for energy.”

The Missouri Chamber will continue to take a lead to protect Missouri employers from this short-sighted plan, both on the state and federal level,” Bunten said.

For more information on this issue, you can contact Bunten at bbunten@mochamber.com, or by phone at 573.634.3511.