Computer science bills near passage in House and Senate 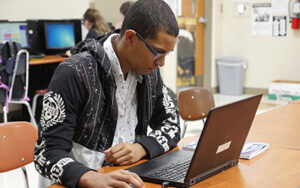 Efforts to enhance computer science and STEM skills for students across Missouri are advancing under two bills nearing passage in their respective chambers.

If passed, the bills would allow Missouri high school students to take one computer science course instead of taking a math, science or elective class.

The legislation would give education leaders and school districts until the 2020-2021 school year to plan and implement the change.

The legislation would also bring a new online program to Missouri schools that would help inform students about careers available in science, technology, engineering and math.

“This is a workforce development bill as much as anything,” said Fitzwater, a Republican from Holts Summit.

He also said that only 25 percent of high schoolers today understand what careers are available in STEM fields.

“It’s really important that they get a view of those opportunities well before they get to college so they’re not spinning their tires in an undergrad program that maybe doesn’t fit them very well because they never got a view of what was available while they were in high school” he said.

The Senate version of the legislation — which includes two bills that were merged in committee — was filed by Sen. Doug Libla, a Republican from Poplar Bluff, and Sen. John Rizzo, a Democrat from Kansas City.

“We have a shortage of those that have computer science experience … If we’re going to continue trying to attract companies to come here, we’re going to have to have a trained workforce and a skilled workforce is what they’re looking for,” said Libla.

“Computer science and STEM skills are mainstream business skills that employers need today,” said Ryan Stauffer, Missouri Chamber director of workforce and education policy. “We know that there are more than 10,000 open computing jobs available right now in the state of Missouri and the availability of STEM-related jobs is growing 50 percent faster than other fields. These bills are an important step forward to address this workforce need. I’d like to thank the General Assembly for making this a priority.”

If passed, the bills would also require the state to create standards and a certification for computer science education. Another provision of the bill creates a fund to help pay for the professional development classes needed to prepare Missouri educators to teach computer science courses.

Both bills await final votes in their respective chambers. The bill numbers are House Bill 1623 and Senate Bill 894.