Amid historic flooding in parts of Missouri, many businesses are stepping up to help those who have suffered losses. 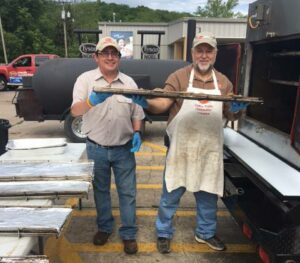 Tyson Foods has been delivering free meals to people in flooded Missouri communities. On May 1, the company was handing out food on Main Street in Noel, a town impacted by a flooded Elk River.

The next day, Tyson provided food to people at the youth and community center in Van Buren. This town sits beside the swollen Current River.

Residents in these cities took to social media to express their thanks for this service.

The Tyson team in Van Buren.

“Thank you for helping our community,” wrote one person. Another resident wrote, “Blessings to all who were involved in making this possible!”

Meanwhile, Anheuser-Busch has sent three truckloads of emergency canned drinking water from a Georgia brewery to flooded communities in Missouri.

The deliveries, which included more than 150,000 cans of water, were scheduled to arrive in St. Louis, Cape Girardeau and Swansea on May 3. They are being delivered to those in need by Lohr Distributing, River Eagle Distributing Co., Grey Eagle Distributing and the American Red Cross.

“As the home of Anheuser-Busch and Budweiser, the St. Louis community means so much to all of us at Anheuser-Busch,” said Jim Bicklein, General Manager of the Anheuser-Busch St. Louis Brewery. “Putting our production and logistics strengths to work by providing clean, safe drinking water is the best way for us to help our neighbors right now.” 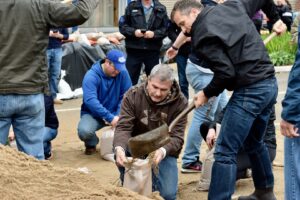 Gov. Eric Greitens declared a state of emergency on April 29 ahead of the heavy, prolonged rains that led to the flooding. The State Emergency Management Agency, the Missouri State Highway Patrol, the Missouri National Guard, and Missouri’s Task Force 1 Rescue Unit are all involved in the flood relief effort.

The governor toured the flood relief efforts on May 1. He said he had spoken with President Donald Trump about the situation in Missouri.

The governor asked Missourians to stay safe, saying: “There’s more flooding to come. I know that with the strength and resilience I saw today, we will get through this together.”

For businesses in St. Louis County that are being impacted by the flooding, a special $500,000 loan fund is being set up to help them rebuild. The interest-free loans are being made by the St. Louis Port Authority. They will be available for up to $25,000. For more information, contact Joe Bannister at the St. Louis Economic Development Partnership: 314-308-5062.