Building a bridge between skilled veterans and job opportunities 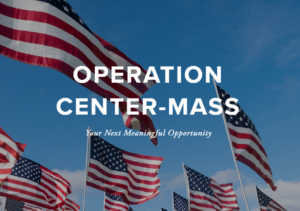 When Will Foy chose to leave the military after a nearly 21-year career as a Marine and army recruiter, finding the resources he needed during his transition to civilian life was an overwhelming process. So he decided to do something about it.

That led to the launch of Operation Center Mass – a digital platform that helps connect Missouri’s more than 450,000 veterans with employment resources and services to help them adjust to civilian life.

An event in St. Louis on November 9 celebrated the start of the new program. Initially, Foy intended to focus his effort in just the St. Louis area. However, by collaborating with the Missouri Chamber of Commerce and Industry, Operation Center Mass will eventually expand across the state. The Missouri Chamber will encourage its members and local chambers to get involved and to take a hands-on approach toward assisting the veterans in their regions.

The problem Foy saw was not so much a lack of resources for veterans as much as that the available resources could be difficult to find. Operation Center Mass tackles this by linking existing programs, mentoring opportunities and tools to a single website for easy access.

“[I’m] extremely excited for the opportunity to take not only St. Louis but the state of Missouri and make it the number one place for our veteran community,” said Foy.

Veteran George Herrera, a fellowship program manager with The Mission Continues, praised the effort to bring together resources for veterans.

Preparing the workforce is the first component of Missouri 2030, the Missouri Chamber’s 15-year strategic plan to reposition Missouri as a global economic leader. Many of this component’s action steps focus on students and improving the education system, but assisting the state’s veteran demographic is another critical objective. Partnering with Operation Center Mass is one step the Missouri Chamber is taking toward its overarching goal to optimize existing training programs and find innovative solutions to address gaps.

“What impressed us was meeting a need for those people, first of all,” said Missouri Chamber President and CEO Dan Mehan at the website launch celebration. “Secondly, the other side of the equation, meeting the need of the employers out there that are looking for people that can do the jobs that they’re trying to fill, and making that match happen.”

As of September 2017, the unemployment rate for Missouri veterans was 4.2 percent. The first goal of Operation Center Mass is to employ 1,000 veterans by the end of 2018. This will be a bright start towards their mission to make Missouri the top place for military veterans to go to when they leave the service.

To learn more about Operation Center Mass, visit their new website at operationcentermass.com.