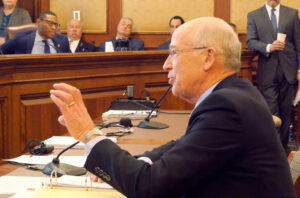 For years, the Missouri legislature has sought to bring venue and joinder reforms to our state to curb litigation abuse. This year, several lawmakers are optimistic that the reforms will finally make it to the governor’s desk.

Too often, plaintiffs with little or no connection to Missouri file cases in plaintiff-friendly St. Louis and Kansas City courts in hope of getting big settlements. This is clogging our judicial system, costing Missouri taxpayers and delaying justice for Missourians who have properly filed their cases. Missouri has been repeatedly listed as one of the worst Judicial Hellholes in the country due to the litigation hotspots caused by lax venue and joinder rules.

SB 7, sponsored by Sen. Ed Emery (R-Lamar), is one of the bills that seek to clarify the state’s venue and joinder laws to ensure that cases are brought in the correct forum. The Senate Committee on Government Reform heard the bill on Jan. 29.

At the committee hearing, Sen. Emery cited court numbers that showed out of the 13,252 mass tort plaintiffs involved in cases being heard in St. Louis City, only 1,035 are Missouri residents.

“We’re clearly out of balance. Our courts are being used as the nation’s courtroom…Senate Bill 7 will put an end to this abuse,” Sen. Emery said.

The Missouri Chamber has held a longstanding position in support of these judicial reforms.

“We think venue would be proper, when out-of-state plaintiffs are suing Missouri businesses, to be in the county where that business has its registered agent,” said Matt Panik, the Missouri Chamber’s vice president of governmental affairs. “We don’t want businesses to have to contemplate litigation in the City of St. Louis if they operate in Columbia or some other part of the state. Bringing clarity for Missouri businesses is important and this bill goes a long way toward doing that.”