In 1982, Marsha and Greg Haefner opened a wholesale greenhouse in South County St. Louis. Like all new businesses, they had to pay a bond to get their sales tax license. 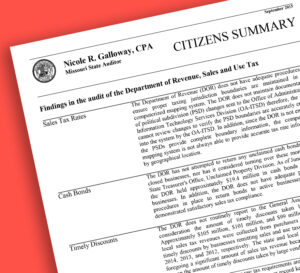 Read the summary of the auditor’s report.

“I had to pay what I considered at that time a very large bond for my small garden center that I was about to open,” said Marsha Haefner, who is now a state representative.

The Haefners’ bond was sent to the Missouri Department of Revenue, which holds the money. If new businesses like the Haefners’ comply with sales tax laws, the bond can be refunded after two years.

However, for more than three decades, the department didn’t refund these bonds unless businesses specifically requested a refund. That led to the department accumulating nearly $20 million in unreturned bonds—including the funds sent by the Haefners in 1982.

In a September 2015 audit, Galloway noted that the department “does not have adequate policies and procedures in place to return bonds to active businesses that have demonstrated satisfactory sales tax compliance.”

The Missouri General Assembly is also probing the situation. On Jan. 12, the Joint Committee on Tax Policy quizzed leaders from the Missouri Department of Revenue about the unreturned bonds.

Speaking to the committee, Deputy Director John Mollenkamp said the revenue department has changed course and is now actively seeking to return the bonds once the two years has expired.

He said the state has already sent checks to many companies refunding their decades-old bonds. For businesses that have closed, the state is working to make refunds available through the Missouri State Treasurer’s unclaimed property service.

“We are making this transition and we have refunded millions of dollars to businesses,” Mollenkamp told the committee.

Rep. Haefner, who sits on the tax policy committee, said she already received a refund of her 1982 bond. However, she said she only received $50 and thinks there might have been an error.

“I assume when we spent the money to open this brick and mortar business that we would have estimated sales to be more than that,” she said.

Todd Iveson, director of the division of taxation, encouraged Rep. Haefner and all business owners who are concerned about unreturned bonds to contact the Missouri Department of Revenue.

“The mistakes are few and far between. Our financial records are pretty good,” he said, noting the auditor gave the department a good overall score.

The Missouri Chamber of Commerce and Industry is concerned about this longstanding practice of withholding bond refunds and encourages businesses to contact the Missouri Department of Revenue and ensure their funds are being returned.

“It’s incredibly disappointing to see nearly $20 million in private business assets sitting stagnant in the state coffers,” said Tracy King, Missouri Chamber vice president of governmental affairs. “Those are funds that could have helped businesses expand and could have created job growth in our state. Most states don’t require these bonds during startup and it’s time for Missouri to explore ending this practice.”