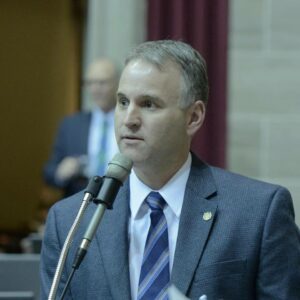 As an experienced attorney from North Kansas City, Rep. Kevin Corlew represents clients in business disputes. He knows Missouri’s judicial system well and he knows there are problems.

Missouri’s unfriendly approach to employers in our courts is getting national recognition. In a recent study by the US Chamber of Commerce Missouri ranked #42 in the 2015 Lawsuit Climate Survey: Ranking the States.  Missouri also made the list of the five worst states in terms of its treatment of class actions and mass consolidation suits.

“As a business owner coming into Missouri you know you have the great potential to be sued and the potential to put a lot of money out to defend unmeritorious claims,” Corlew said.

Rep. Corlew has made legal reform a major part of his legislative mission.  As vice chairman of the House Committee on Economic Development and Business Attraction and Retention and a member of the Judiciary and Civil and Criminal Proceedings committees, he is in a position to bring positive change to Missouri courts. Rep. Corlew has also sponsored key pieces of civil justice reform legislation.

“It is no accident that legal reform has risen to the forefront of legislative action this session,” said Brian Bunten, general counsel. “A persistent and intentional focus on improving Missouri courts is the reason we are seeing significant advances in this arena this legislative session. Lawmakers like Rep. Corlew are putting a lot of muscle behind this movement.”

“The expert witness legislation I propose is a standard used in all federal courts and two thirds of the states,” Corlew said.  “It provides guidelines for a trial judge to be able to determine that someone who is being offered to provide expert evidence is an expert in that field and the testimony he or she is providing is based on reliable facts and data that is relevant to the case.”

In Missouri, courts most commonly use the Frye standard to admit expert witness testimony.

Rep. Corlew cited one example of a case currently making its way through the appeals process in the District of Columbia, where the plaintiffs put forth the theory that cell phones cause cancer.

“The trial judge looked at all the evidence. He realized that the evidence was not scientific and was being rejected in other states but he was constrained by the Frye standard to let that evidence in.”

House Bill 1676 awaits a hearing by the House Judiciary Committee.

The legislation is important because the courts have determined over several decades that arbitration is a fair alternative dispute mechanism that allows businesses and employees to resolve disputes without going to court, Corlew explained.

“Arbitration is a fair and efficient process,” Rep. Corlew said.  “Arbitration may take 6-8 months (to resolve a dispute). However, if a business or employee are in a lawsuit, that’s a minimum of two years and you will have escalated costs.”

“The bill says if you have a written arbitration agreement, you have to take your dispute to the arbitrator, not the courts,” Corlew said.  “After arbitration, if there are issues that one side feels the ruling was unfair or was based on collusion or some legal fallacy, then you can go to court.”

The legislation has been approved by a House committee and awaits full debate by the Missouri House.

Rep. Corlew is also seen as a leader in an effort to pass a common-sense measure that clarifies that an injured person can recover the actual cost he or she incurred for their medical treatment.

The collateral source rule bars the admissibility of trial evidence showing when a plaintiff’s losses have been compensated from other sources, such as insurance or workers compensation.  Plaintiff’s can make money bringing suits over injuries that may already be covered by other sources.

“Our tort system is designed to make plaintiffs whole,” Rep. Corlew said. Current law goes beyond that mission and that is driving up medical costs and insurance costs, Rep. Corlew explained.

Many states have advanced legislative measures to reform collateral source statutes and rein in awards that exceed actual recovery costs.  Missouri lawmakers also attempted to change the collateral source rule in 2005, but the courts have since altered the intent of the law.

For more information on tort issues, you can contact Bunten at bbunten@mochamber.com, or by phone at 573.634.3511.