A new plan to grow jobs in rural Missouri

No matter how you slice the data, the economic performance in rural Missouri ranks well behind the urban parts of the state.

One important factor behind this trend is that people in rural Missouri often have a very difficult time finding the capital needed to turn their ideas into reality. 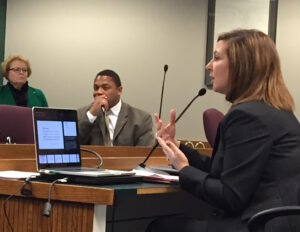 Tracy King testifies in support of the Show Me Rural Jobs Act.

A bill in the Missouri House is seeking to change this by creating a state-run system to channel investment dollars to rural communities. The proposal is contained in House Bill 1927 by Rep. Craig Redmon, a Republican from Canton. Rep. Redmon’s bill is titled the Show Me Rural Jobs Act.

“Our goal is to increase investment in rural businesses,” he said. “It would give them some capital to start businesses, expand business and keep businesses in Missouri.”

During a hearing on the bill, Jeff Craver, principal with Advantage Capital Partners, shared a wide range of data showing the disparity of capital-availability and economic growth between the rural and urban parts of Missouri. He noted that since 2004, only four percent of the risk capital invested in Missouri has gone to rural areas.

“These is a tremendous workforce capacity in rural Missouri for manufacturing and other industries,” Craver said. “But what’s lacking is the capital.”

The Missouri Chamber of Commerce and Industry supports this proposal. Tracy King, vice president of governmental affairs, testified that the rural jobs act is in line with the goals of the Missouri 2030 strategic plan unveiled in 2015.

“We think this is great opportunity to try to expand on some of those opportunities in rural areas,” King said.