A new approach to economic development: Streamlined and driven by demand

For businesses looking to grow in Missouri, there are numerous government incentives that can help offset expansion and training costs.

But it’s not always easy to access these programs.

“If a company comes to Missouri looking to put a plant or a business here, as it is today you might have to go to a half-a-dozen departments or more trying to get done what you need done,” said Sen. Jay Wasson, a Republican from Nixa. “Quite often they say the money’s just not worth the work I have to go through to use it.” 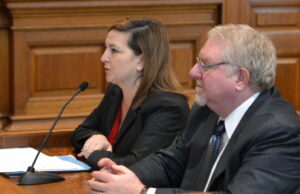 Sen. Wasson is looking to change this.

Alongside the Missouri Chamber and other stakeholders, Sen. Wasson has begun exploring ways to streamline the state’s economic development efforts and refocus job training work.

Among his goals is to establish something akin to a concierge service for businesses seeking to grow jobs in Missouri. These concierge workers would serve as a single point of contact between growing companies and the state, helping shepherd companies through the process of receiving incentives, environmental permits and training help.

“We have the apparatus to do a lot of this,” Sen. Wasson said. “I think what happens is a select few companies may get [available incentives]. But a lot of the other companies don’t even know it’s available. It’s hard in Missouri to even find out what you can get.”

Toward making this change, Sen. Wasson has proposed to create a Missouri Task Force on Workforce Competitiveness. Contained in Senate Bill 1116, Sen. Wasson’s idea was heard by a Senate committee on March 16.

The Missouri Chamber of Commerce and Industry testified in support of the proposal.

“If we are going to compete, we are going to have to come up with an aggressive approach in order to meet the needs and the demands of the employment community,” said Tracy King, Missouri Chamber vice president of governmental affairs.

Another goal of Sen. Wasson’s effort is to transform how Missouri approaches job training. He wants the state to refocus its efforts to directly help companies fill actual employment vacancies.

He was inspired to seek this change when he visited a new airplane manufacturing plant near Savannah, Georgia, last year. While at the plant, he learned how the State of Georgia had helped to prepare 5,000 workers for their new jobs as the plant was under construction.

“The day they cut the ribbon and opened that plant, 5,000 people walked in there and immediately started making airplanes,” Sen. Wasson said. “Every one of them was trained on the machine they were going to be operating. I was extremely impressed with that. Quite honestly, the company was extremely impressed with that. That’s why they were there.”

King said such a change is needed in Missouri.

“We need to be demand-driven when it comes to workforce. That’s not what we have today,” she said. “The focus right now is on the citizens who are looking for a job. Demand driven is looking at the employers who need labor.”

Sen. Wasson, the Missouri Chamber and other stakeholders intend to continue studying this proposal during the coming year.