75 chambers, 50,000 employers — One new, powerful voice in the Missouri Capitol

JEFFERSON CITY — With 2015 coming to a close, the Missouri Chamber of Commerce and Industry is celebrating its largest ever year of expansion. By year’s end, the Missouri Chamber’s pro-business coalition will have grown to include more than 75 local chambers and 50,000 Missouri employers in communities across the state.

For the first time in 2016, this new Missouri Chamber-led business alliance will focus on enacting critically-needed pro-business legislation intended to move Missouri into a leadership position in the national and global economies.

“Less than a year ago, the Missouri Chamber announced our groundbreaking, research-driven strategic plan—Missouri 2030: An Agenda to Lead. According to our strategy, one of Missouri’s most important drivers to economic success in 2030 is a united voice for business,” said Daniel P. Mehan, Missouri Chamber President and CEO. “Since then, we have been asking local chambers of commerce and their members to look beyond their regional economies and join us in working for a stronger Missouri through our Missouri Chamber Federation. Already, 75 local chambers, representing tens of thousands of Missouri employers, have joined our federation and coalesced around a set of shared legislative priorities for 2016. Never before has such a broad, powerful pro-business coalition focused its attention on the state capitol. With this united voice, we eagerly await the beginning of the 2016 Legislative Session.” 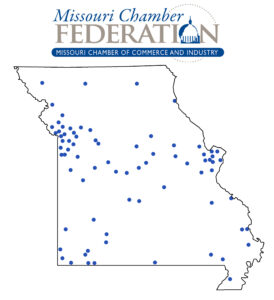 The leading issues Missouri business community’s will work together to address:

“We need to make sure that we are speaking loudly and clearly for the business community to get the things done that we want and need done.  If we don’t, who will?” said Lara Vermillion, president of the Blue Springs Chamber of Commerce. “This effort is critically important. I want to thank the Missouri Chamber for stepping up and organizing this impactful voice for business. They did the research and developed Missouri 2030.  They have the ability to pull the whole state together so we can work as one force through businesses and local chambers.”

Following years of inaction, Missouri is closer than ever to a transportation crisis. By 2017, the state anticipates having just $325 million to spend annually on transportation infrastructure, down from an annual budget of $1.3 billion just a few years ago. Without a new funding plan, a majority of Missouri’s roads will face deteriorating conditions. Some bridges may have to close.

“If Missouri is going to benefit from our most powerful geographic asset—our central location—we need to have a world-class transportation system. Businesses need reliable infrastructure to operate efficiently and grow. That’s true in St. Joseph and it’s true in every part of Missouri,” said Patt Lilly, president and CEO of the St. Joseph Chamber of Commerce. “Transportation is an area where our state’s investments pay back twofold. They pay back immediately in terms of dollars spent locally on engineering work and construction. They also pay back in the long term as businesses benefit from infrastructure improvements and grow jobs in Missouri. Our state desperately needs to solve this funding crisis and the Missouri business community will be actively pushing for answers in 2016.”

While passage of the federal transportation bill recently signed into law by President Obama is good news for Missouri, the state will still need to raise the funds to fully match federal dollars. Even then, the funding available will not be enough to fully invest in Missouri’s most critical infrastructure needs.

Fostering Missouri’s small businesses and entrepreneurs is a critical part of Missouri’s economic future. Missouri needs to expand flexible capital available to business start-ups. One proven method is the Missouri Technology Corporation, a public-private partnership created by the Missouri General Assembly to promote entrepreneurship and foster the growth of new and emerging high-tech companies.

“Investment in the Missouri Technology Corporation has paid big dividends to our state. In fact, the Missouri Technology Corporation is recognized as the leading venture capital investor in the Mid-West over the last five years. MTC programs are proven catalysts for bringing private capital and entrepreneurs from around the world to our region to create companies and high-paying jobs,” said Joe Reagan, President and CEO of the St. Louis Regional Chamber.

Missouri employers are deeply concerned about the state’s workforce. The Missouri Chamber’s Gallup research revealed a wide gap between what employers need for their workforce and students work-ready job skills. The Missouri 2030 Gallup survey showed that only 15 percent of business leaders in the state agree that high schools are preparing students for the workforce.

The Missouri business community relies heavily on this public education system to prepare tomorrow’s workers. However, given the current funding and performance challenges, business leaders are also investing time and resources to develop training systems to ensure our workforce is truly ready for work. Missouri’s business community is working to find ways to maximize our state’s investment in our education system and develop innovative ideas beyond the traditional classroom setting to better prepare our workforce.

“Missouri workers are among the best in the world yet what we hear from employers again and again is that they can’t find the skilled workers they need,” said Matt Morrow, president and CEO of the Springfield Area Chamber of Commerce. “In fact, it’s not a lack of business but a lack of skilled employees that holds businesses back. When training and skills match employer needs, Missouri becomes more attractive to new businesses and perhaps more importantly, existing businesses can expand and thrive. Our current workforce preparation system is incomplete and we are lagging behind what other states offer.  The Missouri business community is united on this front and we are looking for strong progress in 2016.”

The litigious climate in Missouri is harmful to our current business community and is a hindrance to attracting growth opportunities. In a 2015 study, Missouri’s litigation climate ranked 42nd out of all 50 states according to the U.S. Chamber Institute for Legal Reform. The Missouri 2030 Gallup survey found that less than one in four Missouri employers are satisfied with the state’s litigation climate.

A broad array of reforms are needed. Missouri must align our discrimination standards with federal law, ensure civil lawsuits are capped at a reasonable level and eliminate the joint and several liability standard, which incentivizes lawyers to drag businesses into costly lawsuits.

Missouri legislators must also address problems caused by recent Missouri Supreme Court decisions as well as respond to problems identified in pending cases. The business community also seeks reforms that ensure that only qualified professionals are allowed to testify as expert witnesses in cases. Another common-sense piece of legislation would reform Missouri’s collateral source standard and allow juries the full scope of information in determining an injured worker’s award, including the amount the worker received in medical insurance, workers’ compensation or other third party sources.

“There are so many positive aspects about Missouri that help us in our work to attract growth opportunities to the Joplin region. However, Missouri’s litigation climate is a major problem that incents businesses to either locate across the state line or in another region entirely,” said Rob O’Brian, president of the Joplin Area Chamber of Commerce. “We are simply asking for reasonable reforms to return equity to our state’s legal system and improve our national reputation. Communities across the state are hurting due to our unfair legal climate and we are united in fixing this issue in 2016.”

In 2015, the Missouri General Assembly approved right-to-work protections for Missouri employees only to have the bill fail following a veto from the governor. Right-to-work would give workers in Missouri the power to decide whether or not they want to belong to a labor union. Current law forces many Missourians to join unions and pay dues simply based on where they work.

Right-to-work status is an important factor for site selectors who help growing companies choose a location for expansion projects. Each year that Missouri fails to enact a right-to-work statute means more missed opportunities for job creation in our state.

“With 25 states boasting right-to-work protections, Missouri needs this statute to begin to compete for many job creation efforts,” said Mehan. “Every community in Missouri that is competing for employment expansion projects needs our state law to work for us—not against us.”

Reforming Missouri’s workers’ compensation system requires a careful balance to ensure injured workers are protected without causing harm to the state’s business community and job creation efforts. In the last decade, Missouri courts have played a large role in eroding that balance.

Another decision in 2014, the Missouri Supreme Court’s Templemire decision, undid 30 years of established case law and made it easier for dismissed employees to claim retaliatory discharge against their former employers.

Employers in many Missouri communities are struggling under these decisions. The Missouri business community is asking the legislature to clarify the state’s workers’ compensation laws and restore fairness to the system.

“Workers’ compensation reform is a complex subject matter in Missouri and the state’s business community stands ready to assist our lawmakers as they discuss this important topic,” said Angie Thomas, executive director of the Sedalia Area Chamber of Commerce. “It’s a bottom-line issue for our members and every court case that unfairly tips the balance against employers means less money available for new jobs, wage increases, added benefits or expansions. As a united business community, we are asking the legislature to address these cases early in 2016.”

You can read the Missouri Chamber’s detailed 2016 legislative agenda at www.mochamber.com/advocacy.