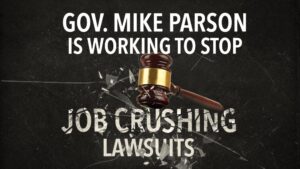 Gov. Mike Parson used the annual State of the State address to urge Missouri lawmakers to have a real discussion about bringing fairness to our state’s courtrooms.

Missouri’s legal climate is a major problem for our state’s economy. The Missouri Chamber of Commerce and Industry is working to put an end to job-crushing litigation practices.

“Greedy plaintiffs’ attorneys are fleecing Missouri’s legal system in a way that kills jobs and scares away potential business investment. If we are going to move forward as a state, we have to start by cleaning up our courtrooms and bringing fairness to our legal system. We applaud Gov. Mike Parson for his leadership on this issue,” said Daniel P. Mehan, president and CEO of the Missouri Chamber of Commerce and Industry. “We look forward to working with Gov. Parson and the Missouri General Assembly to pass an ambitious reform agenda this session. Missouri must prioritize the livelihood and economic prospects of working Missourians over a small group of lawyers who relentlessly twist laws and search for loopholes that enable them to line their pockets. We are doing everything we can to stop these job-crushing lawsuit practices in 2020.”

Several rankings and statistics underscore Gov. Parson’s call for lawmakers to work on this issue this year. The U.S. Chamber Institute for Legal Reform recently ranked Missouri 44th in the nation in litigation climate. The American Tort Reform Association named St. Louis the nation’s fifth worst judicial hellhole. In a recent Missouri Chamber survey of CEOs in our state, 80 percent cited reasons to improve the legal climate. The most often cited reason is that the state’s ranking hurts the economy. Our legal climate also hurts our ability to attract business investment as 89 percent of business leaders nationwide said that a state’s litigation environment is likely to impact business decisions, according to the Institute for Legal Reform survey.