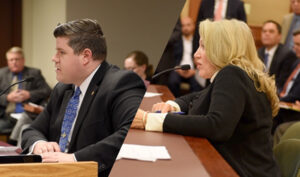 In Missouri, companies can be held liable for products sold decades ago — even if they aren’t the original manufacturer. Current state law on this issue creates a major burden for retailers, who may be forced to indefinitely defend products if the company that made the product has gone out of business.

On Feb. 4, Missouri Senate and House committees both heard legislation to put a reasonable time limit on these lawsuits, commonly called a statute of repose.

With commonsense exceptions, Senate Bill 555 and House Bill 1596 would place reasonable time limits on product liability lawsuits in the state, requiring actions to be filed within 15 years of the sale or lease of the product.

At her bill’s Senate committee hearing, Sen. Riddle addressed the opposition from trial attorney groups who are opposed to legal reforms.

“If this is such a terrible piece of legislation as the trial attorneys would lead us to believe, why would our U.S. Supreme Court as well as our Missouri Supreme Court both deem this statute of repose as legitimate limitations and as having reasonable purpose?” Sen. Riddle asked the committee.

Wayne Price of O’Reilly Auto Parts testified in the Senate committee hearing that without a statute of repose, innocent retailers frequently become a target.

“We are often called into litigation because the manufacturers are no longer viable 10, 20 years, decades later…we had nothing to do with the design, the manufacturing, the packaging, the warnings that were required for the product,” Price said.

The legislation nearly made it past the finish line last year and advocates hope it can be finally passed into law in 2020.

“I think this bill’s been very thoroughly vetted and I believe it’s in pretty good shape at this point. We hope the committee will support it again as you did last year,” said Rep. Trent at his bill’s House committee hearing.

This issue is one of the Missouri Chamber’s legal reform priorities for 2020.

“Implementing a statute of repose would provide a reasonable time limit for products liability cases,” said Matt Panik, Missouri Chamber vice president of governmental affairs. “When comparing the proposals here with such laws in other states, it is clear that the sponsors are offering a balanced approach to accommodate many sets of facts. This balanced approach is evident in the 15-year time limit proposed here, coupled with numerous exceptions such as allowing for an extended time period based on the useful safe life of the product.”