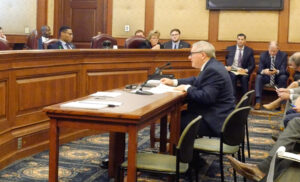 A Missouri Senate committee is discussing a bill to improve the way the state fills judicial vacancies.

Sen. Dan Hegeman (R-Cosby), a 2019 Missouri Chamber Business Champion, is sponsoring Senate Joint Resolution 39 to give the state’s judicial selection commissions the authority to send an uncapped number of qualified judicial candidates to the governor for consideration, rather than the current limit of three candidates.

On Feb. 11, Sen. Hegeman explained in a Senate committee hearing that the current process is problematic because a commission could essentially force a governor’s hand by sending three candidates they favor, regardless of the governor’s preferences.

The Missouri Chamber of Commerce and Industry testified in support of the legislation.

“We do think that allowing the governor to pick from all of the qualified candidates is a good change,” said Matt Panik, Missouri Chamber vice president of governmental affairs.

Panik also pointed out that retention elections would remain in place under this legislation. In addition, the judicial selection commissions would still have the authority to go through the interview process with candidates and make recommendations to the governor within their larger list of qualified candidates.