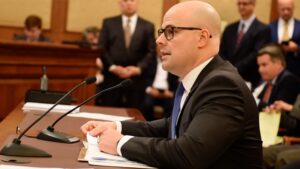 To ensure justice in all civil actions, all involved parties should have a voice in the discussion.

But under current Missouri law as interpreted by the courts, an insurance company only has the right to defend themselves in a lawsuit, not in arbitration. This unfairness is heightened by the fact that some courts have interpreted an insurer’s right to intervene to mean that the insurer may only attend the trial and are barred from rights given to other parties in the dispute, such as presenting evidence.

This makes fair arbitration under these circumstances virtually impossible.

“Imagine showing up to play a football game — like we recently saw this Sunday — only to be told that the other team, the referees and the fans had already decided the outcome and the final score of the game, but your team is still forced to play the game. That’s essentially what we’re telling insurers when they finally have a chance to engage in these types of cases,” said Sen. Luetkemeyer, a 2019 Missouri Business Champion.

Senate Bill 726, which Sen. Luetkemeyer is sponsoring, would reduce the abuse of these arbitration agreements, prevent judgements not supported by evidence and would ensure insurance carriers are given the opportunity to have their voice considered. The bill will also help prevent outlandish judgements that lead to higher premium costs for all Missourians.

The Missouri Chamber testified in support at the bill’s Senate committee hearing on Feb. 4.

“It’s prudent to allow insurers the opportunity to intervene, whether it’s a case at trial or an arbitration,” said Matt Panik, Missouri Chamber vice president of governmental affairs.