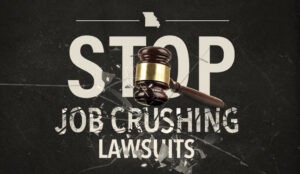 The Missouri Senate has passed a bill that would enact commonsense reforms to our state’s lax punitive damages system. Senate Bill 591 is sponsored by Sen. Bill White (R-Joplin), a Missouri Chamber 2019 Business Champion.

Being unfairly sued is an especially acute concern for businesses in Missouri, which suffers from one of the nation’s worst legal climates — currently 44th in the U.S., according to the U.S. Chamber Institute for Legal Reform.

Throughout most of Missouri’s history, punitive damages were rarely awarded and were properly reserved for when intentional harm was caused. However, in recent years the practice has eroded into something resembling a mere negligence standard, with trial lawyers often automatically filing for punitive damages in an attempt to force businesses into agreeing to massive settlements.

In addition to reforming the punitive damages system, Senate Bill 591 includes fixes to Missouri’s Merchandising Practices Act (MMPA), another legal reform priority of the Missouri Chamber. Passed to protect consumers from unfair practices, today the MMPA is being twisted by trial lawyers to file huge lawsuits over superficial issues — such as having too much air in a candy package. These provisions would restore the MMPA to its original intent.