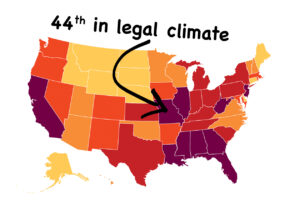 A new report released today reveals that Missouri ranks very near the bottom nationally for lawsuit climate. According to the U.S. Chamber Institute for Legal Reform, Missouri’s legal climate ranks 44thin the nation.

“Missouri has been making strong progress in recent years to become an attractive place for job growth and business investment. But ranking 44thin the nation is a devastating blow to our work to make Missouri an economic leader,” said Daniel P. Mehan, Missouri Chamber president and CEO. “For far too long, trial attorneys have abused the system for profit and used their political influence in Jefferson City to derail our reform efforts. That must end now. We can no longer be a state that’s doing everything it can to improve our economy, only to have our efforts overturned by trial attorneys who want to siphon money into the massive lawsuit industry they’ve built in Missouri on the backs of our job creators and workers. We are calling on Missouri lawmakers to make this their focus in 2020. There is nothing more important to our state’s economic future than to finally bring fairness to our state’s court system.”

The Institute for Legal Reform bases its rankings on the real-life experiences of legal professionals working in Missouri compared to other states. Today, state capitols are the key battleground in the fight over civil justice reform. Missouri previously ranked 49thin the Institute for Legal Reform rating. The state’s modest improvement comes as lawmakers have begun to give this problem greater focus. In 2019, lawmakers passed Senate Bill 7, fixing a longstanding venue and joinder issue.

“Anyone who thinks Missouri deserves a pat on the back for improving to 44thin the nation is deeply mistaken about the damage our legal climate continues to have on our economy. This is an embarrassment for our state and it must be fixed as soon as possible,” said Mehan.

Missouri and St. Louis have also regularly appeared near the top of the American Tort Reform Association’s annual list of Judicial Hellholes.