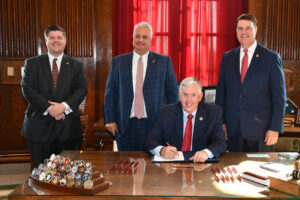 By signing House Bill 345 on June 29, Gov. Mike Parson has ensured more fair arbitration procedures in Missouri by allowing all involved parties to have a voice in discussions.

This new language was needed because under Missouri law as interpreted by the courts, an insurance company only has the right to defend themselves in a lawsuit but not in arbitration. This unequal treatment is heightened by the fact that some courts have interpreted an insurer’s right to intervene to mean that they may only attend the trial and are barred from rights given to other parties in the dispute, such as presenting evidence. These circumstances make fair arbitration virtually impossible.

The legislation, a longstanding legal reform issue for the Missouri Chamber of Commerce and Industry, was sponsored by Rep. Bruce DeGroot and handled in the Senate by Sen. Tony Luetkemeyer.

“We’re grateful to the Missouri General Assembly for approving a measure that will reduce the abuse of arbitration agreements, prevent judgements not supported by evidence and ensure insurance carriers are given the opportunity to have their voice considered in arbitration discussions,” said Daniel P. Mehan, Missouri Chamber president and CEO. “House Bill 345 will also help prevent outlandish judgements that lead to higher premium costs for all Missourians. We appreciate Rep. Bruce DeGroot’s efforts to advance this important reform and thank Gov. Parson for giving it his signature.”