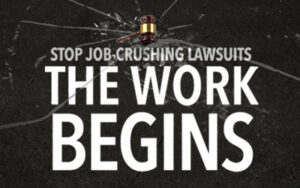 Gov. Mike Parson and Missouri lawmakers are wasting no time in getting to work to bring fairness to our state’s courtrooms.

In the second week of the 2020 Legislative Session, two hearings were held on important legal climate reform bills. Meanwhile, Gov. Parson highlighted the issue in his annual State of the State address.

“The progress we are making is real and exciting, but there is more we can do to improve government and promote our state. We must have a real discussion about tort reform in the legislature,” said Gov. Parson in his widely-covered remarks.

Fortunately, the discussion has already begun in the Missouri Senate where committees are working on bills to reform punitive damages and bring more transparency to asbestos claims in Missouri.

The Senate Committee on Government Reform hosted a standing room-only hearing on Jan. 14 on a bill to change how punitive damages are awarded in Missouri courts.

Sen. Bill White, a Republican from Joplin, is sponsoring the legislation.

The Missouri Chamber strongly supports this bill. In Missouri, plaintiffs’ lawyers are taking advantage of the state’s lax punitive damage system to drive up payouts from businesses. Sen. White’s Senate Bill 591 would enact common-sense reforms, including a requirement that plaintiffs must present clear and convincing evidence that the harm was intentional in order to receive punitive damages. The bill would also establish new procedures and timelines for filing for punitive damages.

“It’s become more of a common practice to immediately file, along with your compensatory case, a punitive damages case. Actually, I’ve overheard in conversations that, ‘Well, it would be malpractice not to file that,’ said Sen. White. “That’s not the intent of it. Punitive damages should be filed when there is a cause for punitive damages.”

Mark Behrens, a lawyer from Shook, Hardy & Bacon who was representing the U.S. Chamber Institute for Legal Reform, said reforms are needed in Missouri because plaintiffs are currently suing companies with very remote connections to asbestos.

The bill under consideration — Senate Bill 575 by Sen. Bill Eigel, a Republican from St. Charles — would ensure juries are fully informed about the  claims a plaintiff has  filed with an asbestos trust

The bill would “basically put all this information in front of the jury and let the jury system work as intended — let them be the finders of fact to determine who is responsible for the plaintiff’s injuries,” said Behrens.

The asbestos bill later passed its committee while the punitive damages bill awaits a vote.

These bills are just the first two pieces of a broad legal reform package the Missouri Chamber is advocating for this session. Action is needed now because Missouri’s legal climate is creating major problems for our state’s economy. The Missouri Chamber of Commerce and Industry is working to put an end to job-crushing litigation practices.

“Greedy plaintiffs’ attorneys are fleecing Missouri’s legal system in a way that kills jobs and scares away potential business investment. If we are going to move forward as a state, we have to start by cleaning up our courtrooms and bringing fairness to our legal system. We applaud Gov. Mike Parson and legislative leaders for focusing on this issue,” said Daniel P. Mehan, president and CEO of the Missouri Chamber of Commerce and Industry. “We look forward to working with Gov. Parson and the Missouri General Assembly to pass an ambitious reform agenda this session. Missouri must prioritize the livelihood and economic prospects of working Missourians over a small group of lawyers who relentlessly twist laws and search for loopholes that enable them to line their pockets. We are doing everything we can to stop these job-crushing lawsuit practices in 2020.”

Several rankings and statistics underscore the Missouri Chamber’s call for lawmakers to act this year. The U.S. Chamber Institute for Legal Reform recently ranked Missouri 44th in the nation in litigation climate. The American Tort Reform Association named St. Louis the nation’s fifth worst judicial hellhole. In a recent Missouri Chamber survey of CEOs in our state, 80 percent cited reasons to improve the legal climate. The most often cited reason is that the state’s ranking hurts the economy. Our legal climate also hurts our ability to attract business investment as 89 percent of business leaders nationwide said that a state’s litigation environment is likely to impact business decisions, according to the Institute for Legal Reform survey.