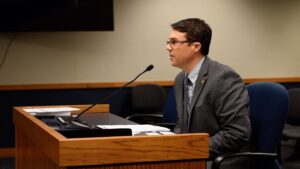 The Missouri Chamber’s Workforce2030 Report revealed Missouri lags behind other states in its growth of number of young workers, a demographic critical to our labor pool.

While the nation is expecting modest young-worker growth of 4.4 percent over the next decade, Missouri is expecting only 2.5 percent growth of its 25 to 44-year-old population. And more than 50 counties in Missouri are expecting their population in this age group to shrink.

“We’re losing the students who are being educated here in Missouri to other states,” said Kara Corches, Missouri Chamber Director of Legislative Affairs. “In our Workforce2030 Report we had a policy recommendation to increase paid internship opportunities in Missouri. This recommendation is predicated on the belief that if we increase engagements between students and employers early on, those students are more likely to stay in Missouri and work throughout their career.”

House Bill 1430 is aimed at helping to reverse the brain drain trend by creating a state-funded work-study program for Missouri employers to receive a wage subsidy for paying participating student interns.

Rep. Kip Kendrick, a Democrat from Columbia, is sponsoring the legislation.

The Missouri Department of Higher Education and Workforce Development would administrate the program and distribute appropriated funds to qualified higher education institutions around the state. The institutions would then award aid to students.

“It will be up to the student to seek an internship and the student can take that award — or in this case, a wage subsidy — to an employer, and the employer enters into a simple contract to be reimbursed a certain percent of the wages that they pay the student up to a certain dollar amount, which is the award amount,” Kendrick said at the bill’s House committee hearing on Jan. 27. “So you see this is a win-win arrangement that could benefit college students as well as Missouri businesses.”

The Missouri Chamber testified in favor of the bill.

“A work-study program gives students places in businesses to help them build those relationships as well as learn those soft skills which are so critical for being successful in a job,” said Corches. “We actually took our policy recommendation and put it into practice through the creation of our Intern Connect portal, which serves as a matching service between higher education students and employers across Missouri. We launched that in partnership with the Department of Higher Ed and it’s been really successful. This bill would also increase the number of internships in Missouri.”

Brian Millner, President and CEO of the Missouri Community College Association, testified in support as well.

“Internships can have a huge impact on a student’s ability to matriculate from their education right into the workforce,” Millner said.