The Missouri Chamber of Commerce and Industry was founded on April 6, 1923, when several prominent citizens met in the hall of the House of Representatives in the Missouri State Capitol.

First called “The Missouri Association for A Greater Missouri,” the organization was originally founded to “promote loyalty to the state of Missouri and confidence in its resources to foster civic and state pride and to inspire patriotic ideals.” in 1928, the organization’s name was changed to the Missouri State Chamber of Commerce, making Missouri one of only 18 states with a state chamber at the time.

The postwar era found the Missouri State Chamber focusing more on influencing legislation in the General Assembly. It greatly expanded its legislative service to members and for the first time hired a full-time lobbyist. As the decade drew to a close, the Missouri State Chamber pioneered its “Political Action Program,” which would be used as a model for other state chambers and organizations. The emphasis was now solidly on “a better business climate.”

The 1970s brought a new name and a new home to the organization. In 1973, the Missouri State Chamber of Commerce dropped the “State” from its name, officially becoming the Missouri Chamber of Commerce. In 1977, it relocated to new headquarters on East Capitol Avenue in Jefferson City. By this time the organization was becoming an effective bulwark against anti-business legislation, dealing with topics such as taxation, labor relations, unemployment compensation, agribusiness, the environment and discriminatory business practices.

These issues were revisited time and time again throughout the 80s and 90s — and still are. The same anti-business forces that we have faced over the decades still exist. In fact, these forces are stronger than ever politically and financially.

Yet some things have changed. With increasing global competition for manufacturing jobs, we made an addition to our name, reflecting our effort to attract factories to our state: the Missouri Chamber of Commerce and Industry.

Our political influence grew, and pro-business majorities were achieved in the General Assembly. We have been at the forefront of sweeping tort reform and workers’ compensation reforms. Innovative economic development tools were also passed and enhanced, allowing our state to position itself for strong job creation. We were the lead advocate for eliminating the corporate franchise tax and securing the first corporate income tax cut in nearly a century.

Today, regardless of the issue, the Missouri Chamber aggressively fights to defeat legislation that would be detrimental to business and advocates to pass hundreds of employer-friendly measures. At the same time, we offer our members a wide variety of resources, services and public education programs.

In 2015, with the data-driven creation of our 15-year strategic plan Missouri 2030: An Agenda to Lead, we set to work with renewed vision to achieve major progress toward four goals by the year 2030: prepare the workforce, compete for jobs, connect through infrastructure and unite the business community.

By 2020, Missouri2030 was no longer just a plan — it was becoming reality. Our state was in the top 15 nationally for wage growth, experiencing the longest continuous private job growth in our history and unemployment was at a 50-year low. The Missouri Chamber had been awarded Chamber of the Year by the Council of State Chambers the previous year.

The COVID-19 pandemic was a worldwide tragedy no one saw coming, and Missouri wasn’t spared. Much of our economy ground to a halt. Companies swiftly had to alter their operations to help stop the spread. These actions, while necessary, had a devastating impact.

During this time, the Missouri Chamber acted as a lifeline not only for our members but for all Missouri employers. 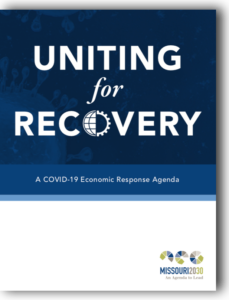 We became a leading, trusted source of COVID-19 information and free resources. Then we worked with businesses, national economic experts and state leadership to create a plan positioning Missouri for a strong recovery. We took critical steps to protect citizens and our business climate during the COVID-19 threat and have since been pursuing reforms to stabilize our economy and position our state to be better prepared for our next challenge.

Our strong response has been vital to helping our state’s economy rebound and thrive again. Thanks to the support of our members and partners, the Missouri Chamber continues to be the driving force in the state securing positive change to improve our pro-jobs economic climate and unite Missouri’s business community.